Home Sports End of the road, or ticket to the Big Dance!
Sports

End of the road, or ticket to the Big Dance! 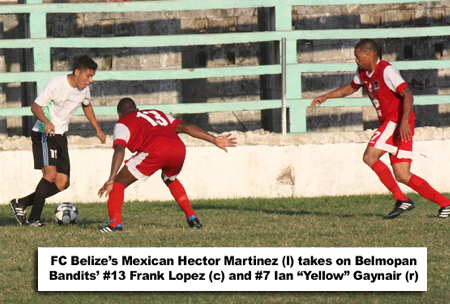 BELIZE CITY, Thurs. Dec. 15, 2016–It’s “do or die” this weekend in the Premier League of Belize (PLB) Opening Season 2016-2017 semifinals game 2 on Saturday night and Sunday afternoon, as two more teams will exit the competition, and two will earn the right to take center stage next week in the championship finals series.

On Saturday night, home standing, defending champions Belmopan Bandits SC will once again put their undefeated record on the line, when they host a team that has held them to a draw in both their meetings so far this season – 0-0 in game 1 of regular season, and 1-1 in game 1 of the semifinals. Their second regular season meeting never took place, as FC Belize, then experiencing management problems, chose to forfeit their scheduled Wednesday night home game, to the visiting Bandits. Both the Bandits’ top goal scorers in regular season, Honduran Jairo Rochez and Brazilian Aloisio Teixeira were held scoreless at the MCC this past Sunday; but their tall midfielder Jerome “Jarro” James came up big with a game-tying header past FC Belize Mexican goalie Rodrigo Vasquez at the 75th minute, after FC Belize’s Mexican striker Hector Martinez had sliced a mean header to beat Bandits goalie Shane Moody at the 34th minute. Having endured the terribly uneven surface at the MCC, Bandits fans are looking forward to their squad’s performance on the familiar “billiards table” at the Isidoro Beaton Stadium this Saturday night.

It’s the new capital versus the old, with the winner going on to the PLB championship finals.

Then on Sunday afternoon at the MCC Grounds in Belize City, BDF will try to rebound from a 3-1 loss this past Sunday to Police United at the Norman Broaster Stadium. Police enjoyed a big 3-nil lead, on goals by Carlton “Fubu” Thomas (22’), Danny Jimenez (38’) and Byron Usher (49’); and it wasn’t until injury time that BDF avoided the shutout with a goal from Shane “Chucky” Flores (91’). But the score does not tell the whole story, because our reports are that BDF star midfielder Osmar Duran did not suit up for the game, having strained a muscle in rigorous exercises under new national team coach Richard Orlowski at the FFB Stadium. Star BDF goalkeeper Tevin Gamboa was also visibly hobbled in the game at Norman Broaster, and he was also involved in the mid-week national team training. BDF coach Jerome Serano lamented the setback, questioning the wisdom of such training (the Cooper Test) at this stage of competition; but he informed us today that Osmar will be ready for the game this Sunday at the MCC.

Belize City fans have been treated to a healthy serving of playoff action in this PLB season, with both city-based teams in the semifinals. But they still want more; they would like to see some finals action for Christmas.

There are no guarantees on Saturday night at the Isidoro Beaton, but come Sunday afternoon, all roads will lead to the MCC Garden. Police United are in the driver’s seat. It will be a tall mountain to climb, but our BDF soldiers are undaunted by the 2-goal deficit; and fans can expect them to live up to their motto: “Shoulder to shoulder!!” and from whistle to whistle!!