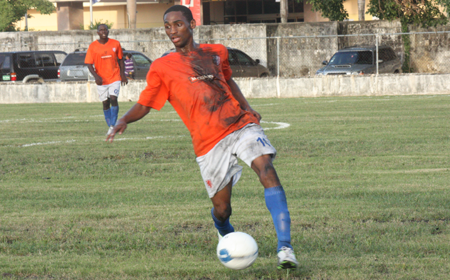 BELIZE CITY, Mon. Feb. 2, 2015–The Closing Season of the Premier League of Belize (PLB) 2014-2015 tournament picked up right where the Opening Season had left off, with unbelievable parity amongst the competing teams, and only one of the four Week-1 games produced a winner, and that in injury time.

Week 1 of the Closing Season opened on Saturday night, January 31, at the Isidoro Beaton Stadium in Belmopan, where the finals had been played a couple weeks earlier; and the same two teams, defending 3-peat champion Belmopan Bandits and sub-champion Police United squared off for ninety minutes, with neither team able to score in this one, which ended in a 0-0 draw.

The other 3 games were played on Sunday, all scheduled to start at 3:30 p.m.

At the Carl Ramos Stadium in Dangriga, it was another nil-nil affair, as neither home-standing Wagiya or visiting King Energy/Freedom Fighters from Punta Gorda could find the back of the net.

Meanwhile, out west at the Norman Broaster Stadium in San Ignacio, the highly rated Verdes FC had their hands full with fellow Cayo team San Ignacio United FC. Verdes got on the scorecard early through Ryan Gill (7’), but Garrett Bermudez (34’) gave San Ignacio United the equalizer before the half ended. And it remained knotted at 1-1 throughout second half, until in injury time Verdes got the benefit of a San Ignacio own goal by Julian Maldonado (90+’), to come away with the 2-1 win.

In Belize City, it was a grand home-coming for FC Belize, after the Belize City based team had to play the whole of the Opening Season at People’s Stadium in Orange Walk, while the MCC was reportedly closed for renovations. Though some work had apparently been attempted on the field, which is far from completed, there was hardly evidence of any other infrastructure work, except four cement pillars outside the corner flags that are supposed to be the base for the new lights, yet to be installed.

Nevertheless, FC Belize was at home, finally, at the MCC Garden, where they hosted the powerful Belize Defence Force FC, who had shocked Verdes FC, 1-nil, in the last playoff game of the Opening Season, dashing Verdes’ hopes of going to the finals. That BDF goal had come from Osmar Duran, and their #10 striker made his presence felt in yesterday’s encounter with FC Belize.

The game started at a fast pace, and six minutes after kickoff, BDF’s right side striker Shane “Chucky” Flores sent a hard grounder across the FC Belize goal that just missed the far post, and saw a sliding Osmar Duran inches away from scoring, but colliding with the goal post and having to leave the game momentarily. It looked like a long day for FC Belize, but a few minutes later, FC Belize’s Ernest Flores cross from the left side found advancing midfielder Carlos Lino with space ahead, and he quickly entered the eighteen and drove a hard shot from close range past BDF goalkeeper, Tevin Gamboa, for the 1-nil FC Belize lead at the 10th minute.

Unfazed, BDF maintained their relentless attack, with consecutive shots from close range by BDF #10 Osmar Duran and #11 Shane “Chucky” Flores rebounding off the bodies of FC Belize defenders. The BDF offensive paid off at the 22nd minute, when a cross goal pass from the left side by James Flores saw a scramble in front of FC Belize goal, with Zabble rejecting a shot by Chucky, but then right midfielder Leon “Lem” Jones pounced on the rebound to get the equalizer for BDF.

Five minutes later, it was BDF shaking the net again. The play started from midfield, where FC Belize veteran playmaker Edon “Yellowman” Rowley had the ball stolen by BDF’s #10 Osmar Duran, who immediately sent a through pass across the middle from left to right, where it found the streaking Chucky Flores with a path to goal. Zabble scrambled out of his goal, but was easliy beaten by Chucky, who sent it home for the second BDF goal at the 26th minute.

The half ended, 2-1, BDF; and when FC Belize’s Luis Arriola replaced the tiring Yellowman Rowley in midfield, BDF coach Charlie Slusher was taking no chances, inserting Carlton “Fubu” Thomas, who was reportedly recovering from a recent injury, into the ball game. But FC Belize got an early opportunity at the resumption of second half, when tall rookie Jahron Myvette penetrated deep on the left side, and pushed a pass to striker Bryan Martinez, who was taken down in the eighteen; penalty. And the veteran FC Belize sweeper Albert “Allie” Thurton (47’ PK) made no mistake, driving his shot hard and low to the left corner; 2-2 ball game. And it remained that way till the long whistle.

It was a pleasing outcome for FC Belize, their first home game at the MCC since it was closed to football on June 2 of last year.