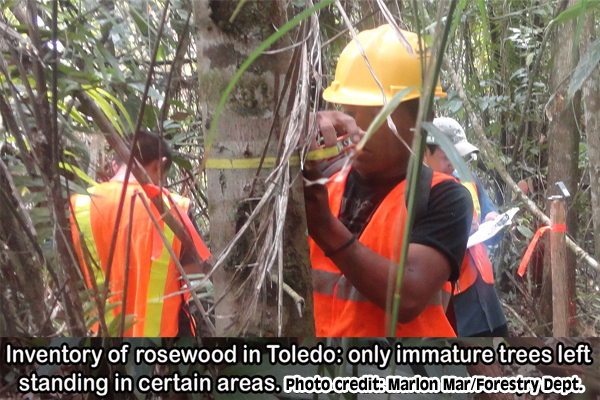 Preliminary information coming out of a $130,000 rosewood assessment being conducted by the Forestry Department is that illegal loggers have cut down so many mature trees—standing in the forest for at least 80 years—that it could threaten the health of rosewood stocks in southern Belize.

Dr. Percival Cho, Forest Officer, is leading the rosewood assessment, which he told Amandala is almost 50% complete and should be concluded by June 2014.

While Cho could not provide us with exact numbers at the time of our interview, he was able to tell us anecdotally what the situation looks like on the ground, in Toledo and Stann Creek, where they have been doing the inventory.

He said that two teams of 4 persons each (locals hired for the project) have been measuring rosewood trees, and they are able to say that the majority of larger trees, 12 inches in diameter and more, are found as stumps—which means that they have been stripped from the forest. The standing trees are smaller and immature, not suitable for export for hardwood products, but only usable to make fences and to burn as firewood.

Cho noted that this alarming trend was pronounced in the areas targeted by illegal loggers, but there were some areas where healthy stocks were found.

What does that mean for the species? Cho told our newspaper that the removal of the mature trees means that the reproductive individuals have been lost, and if the trend continues and loggers begin to target smaller trees, the rosewood stock could be decimated. It takes 80 years for trees to reach maturity, he indicated.

The inventory began in February, after Cho and his team used a “systematic plot layout” software to randomly select 200 rectangular plots of 1.5 acres, and they have been measuring the size of rosewood trees and stumps within those plots.

He informed us that they just got word from Cabinet that it wants the team to quickly wrap up the rosewood inventory by June.

On Tuesday, Wilber Sabido, Chief Forest Officer, told us that after the inventory the Forestry Department will present recommendations for the Minister of Forestry to table at Cabinet, but if the pillaging continues unabated, he said, there may not be any rosewood left to assess. (See story under Highlights.)