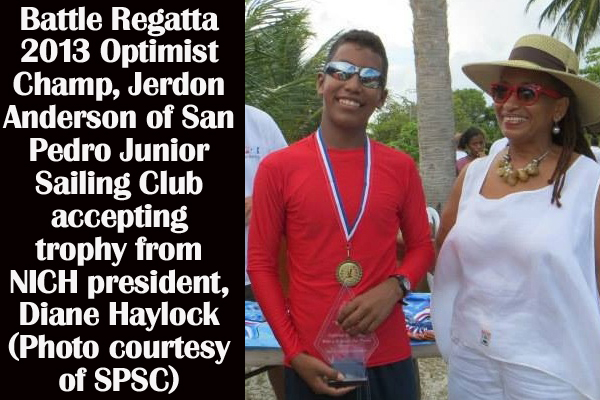 A rainy week gave way today to sunny skies and steady winds, between 9 and 12 knots. At the end of 5 races in the Optimist Class, consistent sailing by Jerdon Anderson of the San Pedro Junior Sailing Club (SPJSC) allowed him to sail away from 2013 Battle Regatta with 1st Place honors. Isaac Ritchie of the Placencia Sailing Club (PSC) followed close behind in the “Tipsy Tuna” boat, grabbing 2nd Place. Anthony Ricardez, Jr. of the Belize City Sailing Club (BCSC) in the “Howarth Belize” boat held on to 3rd Place, and not too long before overcast skies reappeared.

Sailing fans and spectators were treated to superb weather, and the sailors enjoyed the lightly chopped turquoise seas.

The 4th Battle of Saint George’s Caye Regatta was hosted by the Belize Sailing Association (BzSA) on St. George’s Caye under the patronage of His Excellency the Governor General, Sir Colville Young, who was in attendance. Battle Regatta 2013 was held in conjunction with the launch of the September celebrations.

BELIZE CITY, Thurs. Oct. 1, 2020-- As we are about to go to press tonight, a bombshell 5-page release from the Football Federation of...
Read more
Sports