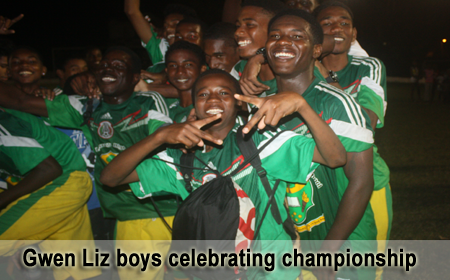 BELIZE CITY, Thurs. Feb. 9, 2017–There were no big surprises at the MCC yesterday in game 2 of the Finals for both females and males in the Central Secondary Schools Sports Association (CSSSA) 2016-2017 football championships.

Defending back-to-back female champions, SCA girls were the clear favorites going into yesterday’s game 2 of their finals series against Ladyville Technical girls. SCA had posted a decisive 2-nil win in game 1 on Monday, with goals from Jodi Pott and Gabriela Mendoza; and yesterday, they sealed the series with a first half goal from Charlize Hunter, to win 1-nil and claim the championship with an aggregate 3-0 score. Ladyville Tech girls tried their best, which is all their coach, Daniel “Sundance” Smith could ask for; but the better team won. With the victory, SCA girls are now three-peat CSSSA football champions, and will go on to represent the Central Zone in the national tournament next weekend in San Pedro.

SCA coach Mario Rodriguez is to be commended for achieving major skills development and a structured game that bodes well for the future of female football in Belize. 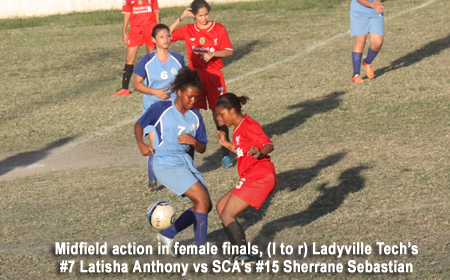 In the boys game which followed, it was just as clear from the outset that the Gwen Liz team was a step ahead of their SJC opponents in the talent department. The Gwen Liz front line – Keron Patnett, Michael Deshield and Jaydon McGregor, with Orlando Velasquez and Michael Palacio anchoring the midfield, sounds like an all-star from the recent Smart 13 & Under and BDFA U-15 tournaments. SJC, coached by semipro veteran Ryan Simpson, exhibited good team play, but were simply overmatched by the Gwen Liz fire-power. Right wing Keron Patnett, like he had done in Monday’s 2-0 win in game 1 over SJC, opened the scoring for Gwen Liz yesterday, and left wing Jaydon McGregor converted from the penalty spot for a first half 2-nil lead. McGregor added another early in second half, as Gwen Liz cruised to a 3-nil win, and a 5-0 aggregate score for the championship.

Gwen Liz coach Windell Esquiliano has done well in maintaining control and order among a bundle of talent, at least one of which, tall midfielder Orlando Velasquez, is definitely destined for a place in our national team.

(William Ysaguirre contributed to this report.)