BELIZE CITY, Mon. Jan. 10, 2022– A large number of schools across the country reopened today for a blend of in-person and online classes, also being referred to as “hybrid learning”. What many had been wondering in the days leading up to the long-delayed reopening was how well hybrid learning would fare in the face of the still ongoing COVID-19 pandemic. In interviews with the media, principals Karen Canto and Indira Bowden of Edward P. Yorke High School and Belmopan Methodist High School respectively, provided a glimpse into what hybrid learning will be like for schools and what the future holds for teachers and students alike.

In the case of Edward P. Yorke High School, Principal Karen Canto said that Monday, January 10, 2022, is the first day back for students. Only fourth-form students, however, are on campus for now.

“Initially, we had planned for the entire school, in a shift system, so that we would have had first to fourth form, but half of each class in each room and the other half would be at home,” said Canto. “When the numbers started to rise, we realized maybe we don’t want to have so many kids because half of our population would be over 325—and that’s half,” she noted.

As a result, EP Yorke has decided to limit in-person classes to fourth formers, who will be sitting the CXC exams very soon. Come next month, however, Principal Canto expects that students from first form to fourth form will be back on campus, and she said that classes will be conducted via a shift system.

Much like EP Yorke, Belmopan Methodist High School expects a full reopening come February. For now, though, only 40 students are attending classes on the school’s campus each day, with first and second form students attending on Mondays and Wednesdays and third and fourth form students attending on Tuesdays and Thursdays. According to Principal Indira Bowden, the high school started having in-person classes back in December—a move made to accommodate students who were not performing well at home and those who did not have the necessary devices for online learning.

When asked what parents thought about the return to in-person classes, Principal Bowden said the following:

“Majority of parents are looking forward to the opportunity for their child to be back in the classroom. It’s been two years since students are out, and I think by now they realize that students need to be back.”

Bowden also urged parents to have their children vaccinated. Currently, somewhere around 80% of the school’s students are vaccinated, along with 98% of its teachers.

Both Principals Bowden and Canto have said that their students are excited to be back on campus and in the classroom with teachers. Like all other schools that are reopening this week, they have implemented several safety measures to ensure COVID-19 protocols are met, such as sanitization and hand-washing stations, distanced classroom seating, social distancing markers, and monitoring of students during breaks to prevent crowding. 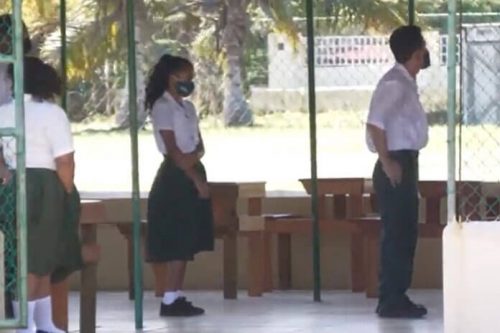