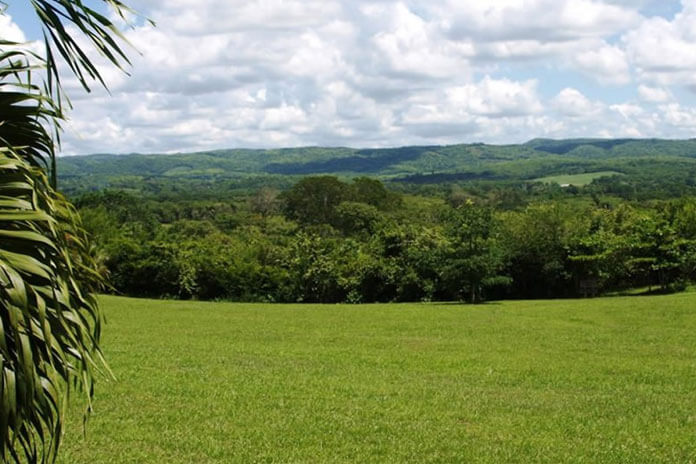 Belmopan, Wed. Sept. 9, 2021– At last week’s special sitting of the House of Representatives, Prime Minister Hon. John Briceño introduced a reformulated version of an agreement between GOB and The Nature Conservancy (TNC) for the preservation of the Maya Forest Corridor that had initially been arranged in the final months of the preceding UDP administration but had become controversial due to certain tax concessions by GOB and the allocation of ownership of carbon credits to TNC that had been viewed by some as excessive. The agreement, known as the MFT agreement, stipulates, according to Senator Eamon Courtenay, that “the” TNC will finance the acquisition of certain lands called ‘The Conservation Lands’ to be held by the trustee, the Belize Maya Forest Trust. The GOB thus granted TNC certain stamp duty and land tax exemptions for a period of fifty years, licenses and all carbon rights and credits associated therewith and proceeds of sale in respect thereof regarding said lands to be held in trust for the sole use and benefits of the conservation, protection and maintenance of said lands.” At the House meeting on Friday, however, Hon. Briceño had explained the modifications that had been made to the terms of the agreement. “Land taxes shall be payable on the MFT lands at a rate of a dollar and forty cents per acre – a discounted price. This will yield approximately three hundred and sixty four thousand dollars per annum or eighteen million, two hundred and fifty dollars over the period of fifty years.” He further stated, “Any excess carbon credits offset sale proceeds on the existing carbon sequestered over and above the fifty-four point five million US, being fifty percent of the acquisition cost, interest, and expenses, or roughly thirty-eight point five million dollars US – one hundred percent of the endowment cost cap at fifteen million dollars US and management costs or cap at one point one million dollars”.

During the Senate meeting at which the modified agreement was reviewed, UDP senators echoed the statements of the members of the Opposition in the House of Representatives — classifying the PUP’s sudden embrace of an agreement whose terms they had condemned not too long ago, hypocritical.

“In Belize they say, you know. One of the most difficult things to do is eat your vomit. It’s not a pleasant thing to do. But it is very magnanimous of the PUP and especially Senator Courtenay to eat his vomit for the benefit of the country. He did recall – I mean who can forget, pronouncements were wild and passionate. He was busting something and revealing some great act of treason by the UDP when he found this TNC agreement that gives essentially value to the country for conservation. He hailed it, or defiled it, as the worst thing that you could imagine a country could do. And all the giveaways, and all the things that Minister Pott at the time was going to do, and all the things he waived and all the things he was giving away. Only for us to find out, when we found the deal and looked at it – I found it and I looked at it. I should say, Minister Pott clearly had no authority to waive taxes and the things goes beyond the two million just like what we’re doing here today you know? So, I think Senator, you need to take one more magnanimous step. I think you need to apologize to your colleague for the very rough things you said when this matter came up with this same TNC deal. Same thing. You are using now and clearly shows from what we’re hearing the Prime Minister saying about debt restructuring, that these things have value. Conservation has value … So not only is the PUP taking back their words concerning the TNC arrangement. They’re doing more. Which goes to show that a lot of what they do in the National Assembly is just grandstanding. Because they know that many of the things that we did when we were in government were of extremely high value,” stated Senator Michael Peyrefitte.

Senator Osmany Salas, representing the NGO’s, then rose to support the motion.

“We must agree that this is terrific news, and I congratulate the government for taking that bold step and for the previous administration for having worked on it initially. But I need to talk a little bit about why this is not going far enough. I am sure that government understands that financing the management of conservation lands such as those is no easy feat. We’re talking about millions of dollars a year needed to manage such lands, in this case the conservation trust properties. Since I come from some of that experience, I know that it will be all hands on deck among the NGO partners to ensure that year to year they have sufficient funding, not only from the sale of proceeds of carbon credit but from multiple sources. Many of those from outside of Belize, to secure the conservation protection and maintenance of the land entrusted to them as far as its management and administration, should create jobs and should help with engaging surrounding communities … If we include all the other protected areas that NGOs are co-managing, we should understand how much fundraising is happening year to year. It’s a lot of money so, one would therefore imagine that government will do all in its power to be a full partner at the table to facilitate the NGOs to close the financing gap, not to broaden the financing gap for the management of these areas … So, the point that I need to make is that after acquisition cost and of these things have been reimbursed, that’s not the end there. The organizations will still be burdened with securing financing to cover the management costs of these areas … It’s true, the conservation lands in question are not public lands for sale. But they’re not private lands either. They are held in trust for the government and people of Belize, so in my opinion, Madam President, charging land taxes on such conservation properties sets a bad precedent,” he said.

Senator Bradley echoed the sentiments of Senator Salas — emphasizing the significant roles that NGOs play through the oversight of conserved lands.

“I want to echo the sentiment of Senator Salas in relation to his presentation and commentary. I’ve been hearing some back and forth in terms of what one administration did and the other administration and what was good and what was not good. I think that what is most important here is a recognition of the importance of the environment. And I think that what is fundamentally important from what Senator Salas indicated is not withstanding which government is involved, the environment itself is tremendously important and valuable to Belizeans … I think that it is also important to appreciate from Senator Salas’ comment, the economic value that agreements like this can bring and partnerships like this can bring. And I think it is within that context that he made the comment which I think should not be lost in the debate about meaningful discussion in relation to cost-sharing and the sacrifices that environmental groups show to preserve the environment. These lands are acquired by private efforts and that brings a significant advantage to the Belizean public. When one group brings that to the table, I think that is a valuable point which I don’t want to be lost in the cross debate about PUP and UDP,” he said.

PUP Senator Christopher Coye reiterated all the other Senators’ sentiments regarding the NGOs’ role in the agreement. However, he also stated that there also needs to be a balance between sustainable development and conservation, which the UDP did not account for in the previous version of the agreement:

“This effort has been a process that involved the past administration and their original agreement. And once the new administration came to recognize the commitments already given, it was important for the new administration to revisit and look at what is the best deal we can get for Belize. We represent people. So, we have to strike a balance. Striking a balance of protection of biodiversity and sustainable human development. So, when we look at that situation, how can we ignore the complete waiver of all taxes? The complete abandonment of any interest in carbon credits, especially when we were in the midst of a pandemic? When we were in the midst of a deep economic recession? How can we give away those monies willy-nilly? So, we have to look at striking a balance … So, getting back to the agreement, we looked at the terms of the agreement. And we have to thank the UDP administration. We have to thank the UDP administration for not understanding the law. They didn’t understand the land tax act. They didn’t understand the law on carbon credits. So that is what, in fact, provided us with the leverage to negotiate,” he said.

Ultimately, however, the motion was approved and the agreement with the TNC for the preservation of the MFC corridor is now finalized.