Shuttle van destroyed by fire on the George Price Highway 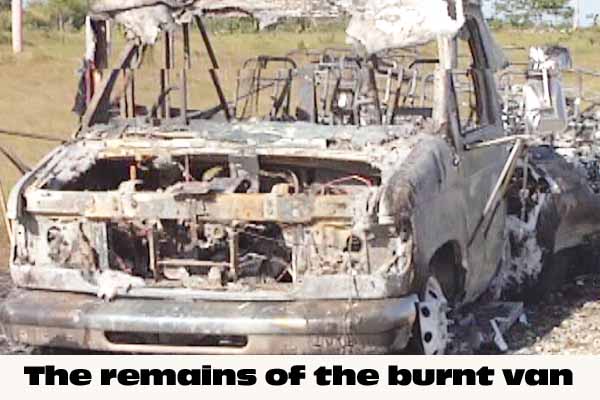 Driver and owner refuse to give statements to police

A shuttle bus was destroyed by fire when it erupted into flames at about Mile 25 on the George Price Highway.

Firemen responded quickly and put out the blaze, but the van had already been completely burnt.

However, their quick response prevented the fire from spreading into the bushes, which would have caused a massive bush fire. The incident occurred about 1:40 yesterday afternoon.

The particulars of the shuttle bus and the cause of the fire are unknown because the investigation into the fire has been halted, Amandala was told, because the owner of the van and the driver would not give statements to Fire Department officials, and thus impeded their efforts to investigate.

Police said, however, that the van had been rented to Richard Arnold by Gregory Durant, who had rented it from his stepfather, Linsdale Blease.