SIB report on state of economy 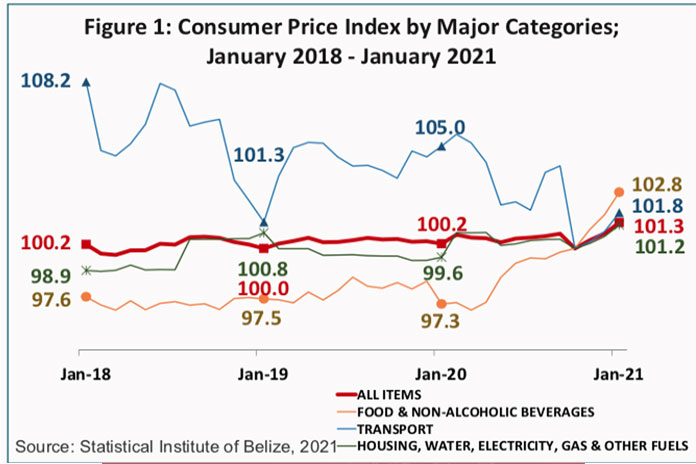 Belize’s GDP contracted 14% in 2020
Preliminary estimates from the SIB show that our annual GDP, the total value of goods and services produced in the country, fell “from $2,880.9 million in 2019 to $2,475.1 million in 2020”. The SIB says the greatest contraction was in the second quarter, with a drop of 23%, “mainly due to decreases within the services sector.”

Fourth Quarter Report
2020 4th Qtr. GDP is 13.1% less than in same period in 2019
Estimates of the Statistical Institute of Belize are that the total value of goods and services produced within Belize in the 4th quarter of 2020 “stood at $592.6 million, down $89.6 million from $682.2 million produced in the fourth quarter of 2019.” The SIB says the services sector decreased by 18.8% in the 4th quarter, and there were significant decreases in the ‘Wholesale and Retail Trade’, ‘Transport, Storage and Communication’, and ‘Taxes on Products’ categories, but the output in the agricultural industries grew by 0.6%, and increased production in the Electricity and Water industries helped expand output in the secondary sector by 22.5%.

Secondary sector grew 22.5% in fourth quarter.
Driven by the electricity industry, output in this sector totaled $94 million in the 4th quarter of 2020, up 22.5% or $17.3 million over the same period in 2019. Electricity production, with hydroelectricity boosted by water dumped on Belize by hurricanes, grew by 142.3%, but water consumption decreased by 7.4%.

The ‘Wholesale and Retail Trade’ industry contracted by 22.1%. Additionally, overnight tourist arrivals were down by 85.6 percent in comparison to the fourth quarter of 2019 — plunging from approximately 120,000 visitors to just 17,000 visitors. With land, sea and air transportation interrupted, the ‘Transport, Storage and Communication’ industry declined by 20.4%; and “‘Government Services’ declined by 3.3 percent.”

JANUARY 2021 REPORT
Domestic exports up 1.1% in January
The SIB reported that Belize’s domestic exports “for January 2021 amounted to $16.2 million, up a negligible 1.1 percent or $0.2 million when compared to exports for January 2020, which were valued at $16 million”, with sugar earnings of $1.3 million “virtually unchanged when compared to exports of last January”, thanks to “improved prices for sugar on the world market”, and revenues from animal feed exports grew “from $0.4 million in January 2020 to over $2 million in January 2021.”

Belize imported $5 million more in goods, mostly beer, in the ‘Beverages and Tobacco’ category, with the value of imports in this category rising “from $3.1 million in January 2020 to $8.1 million in January 2021”; however, most of the beer imported “was meant for re-exportation.” The ‘Designated Processing Areas’ category “rose from $1.9 million to $3.3 million, on account of higher purchases of tissue paper, metal office furniture and centrifuges.”

Consumer Prices up 1% in January
Statisticians at the SIB reported that in the month of January 2021, the total value of purchases in the ‘Food and Non-Alcoholic Beverages’ category increased notably by 5.7%, with the ‘Food’ sub-category “rising by 6.5% compared to January of last year”. Higher prices were “observed for tomatoes, red kidney beans, natural milk, cabbages, rice, watermelons, potatoes, onions, sweet peppers, whole chickens, and flour”, while there was a decrease in prices “for ground beef, pork chops, beef steak and plantains.”

There was a rise in home rental costs, by 1.6%, and the cost of a hundred-pound cylinder of LPG went up by $7.26. The cost of goods in the ‘Personal Care, Social Protection and Miscellaneous Goods and Services’ category went up by 2.2%, with personal hygiene products increasing by 2.7%. The cost of transportation went down “by 3.1% for the month of January 2021 when compared to January 2020, and lowered prices at the fuel pumps saw prices in the ‘Fuels and Lubricants’ sub-category go down by 8.8%.”

Hotel accommodation rates were down 24.4%, leading to a significant drop of 12.8% for the month of January 2021 when compared to January 2020 in the ‘Restaurants and Accommodation Services’ category.

Engineering is an exciting field of work; however, the industry has an ever-aging workforce that needs to be replaced and is currently offset by...
Read more
Features