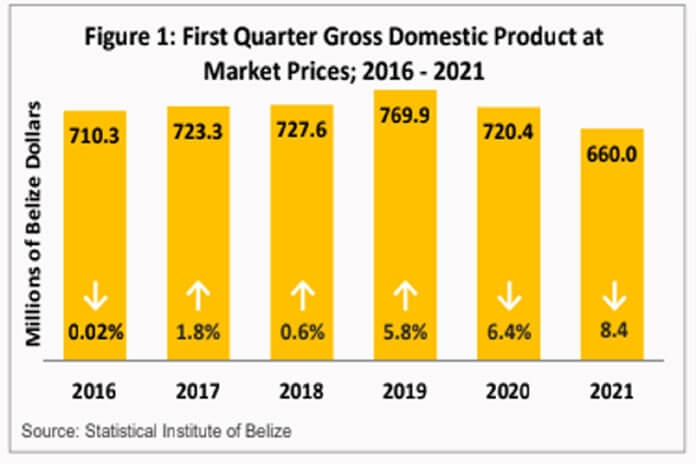 BELIZE CITY, Wed. June 30, 2021– In the Statistical Institute of Belize’s (SIB) report on the country’s economic activity in the first quarter of 2021, the institute noted that the country saw a 28.8 % increase in exports— which shot up from BZ $36.9 million in the first quarter of 2020 to BZ 45.7 million in 2021: an increase of BZ $8.8 million. Notably, the export of bananas yielded an increased revenue of almost BZ$3 million. There was also an increase in revenue from marine exports — which rose from BZ $0.1 million to BZ$1.7 million, and from animal feed exports, which yielded BZ $2.2 million in 2021 in comparison to BZ$0.8 million in the same period in 2020. Additionally, there was an increase in earnings from the sale of sugar, with BZ $18.3 million being earned in the first quarter of 2021, which is almost a million dollars more than the BZ $17.6 million earned in 2020. Also, the country this year exported a small shipment of crude oil valued at BZ$0.02 million, whereas in 2020 there were no exports of crude petroleum due to border closures.

The only commodity which yielded decreased revenue in the first quarter of 2021 was citrus products. The country had earned BZ $5.6 million through the export of those products last year, but received a slightly lower BZ $5.1 million this year due to “diminished exports of grapefruit concentrate”.

The increase in the country’s imports, however, was even more substantial than the uptick in exports, with about BZ $59.4 million being spent in the first quarter in 2021 — a 58.2% increase over what was spent in 2020, when there were “severe disruptions to internal trade” as a result of COVID-19, says the SIB. Substantial increases were seen in the purchase of products such as machinery and transport equipment, with the amount spent on these items rising to BZ $35.1 million from the BZ $18 million spent in 2020.

Notably, while these import figures are drastically higher than the 2020 import numbers, Tiffany Vasquez, Statistician II of the SIB, stated that “one should note that this spike simply signals the return to normal import flows. As these figures are in comparison to the record low imports of last year. Where imports for the month of April and May in particular hit historic lows owing to the challenges brought on by the Covid -19 pandemic.”

Domestically, our Consumer Price Index for May 2021 shows that Belizeans saw an average 2.8% inflation as a net effect of higher-priced fuel, food items, liquid petroleum gas, and personal care products. For the month of May 2021, transport prices increased by 10.3%, the prices of food and non-alcoholic beverages rose by 3.6%, and the cost of housing, water, electricity, gas and other fuels rose by 1.1%. The prices of personal care, and miscellaneous goods and services increased by 1.6%. Prices in the information and communication category saw a decrease of 4.6%, which is being attributed to lower prices for tablets, external storage devices, televisions, etc.

Finally, as expected, Belize’s GDP decreased by a notable 8.6%, with the value of goods and services produced in Belize being valued at a total of BZ $660 million in the first quarter of this year. This was reduced from the previous year’s first quarter yield of BZ $720.4 million. According to the SIB, this is the fourth consecutive quarter wherein our economy has contracted due to the effects of COVID-19. Production fell by 12.3% and the primary sector also decreased by 2%. The secondary sector, however, saw growth of 4.3%, which has been attributed to an increase in electricity production. The tertiary sector, which accounted for almost two-thirds of our GDP, saw the greatest decrease — falling by 12.3% or a value of BZ $54 million. This drop was primarily caused by the plunge in the business activity of hotels and restaurants, whose revenues decreased by 81.7%. Overnight tourist arrivals fell from 123,000 visitors in the first quarter of 2020 to 30,000 visitors in the first quarter of 2021, while no cruise ships were allowed entry into the country. Other parts of the tertiary sector such as transport and communication decreased by 14.3%, while wholesale and retail trade decreased by 7.3% and the revenue generated by producers of government services decreased by 4.6%