Home Crime Skeletal remains found, believed to be that of Cayetano Nah, 83
CrimeGeneral

Skeletal remains found, believed to be that of Cayetano Nah, 83 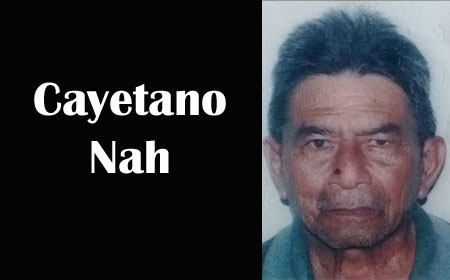 CAMALOTE, Cayo District, Fri. Mar. 27, 2015–The ongoing search for senior citizen Cayetano Nah, 83, of Camalote, Cayo District, who has been missing since Monday morning, February 2, ended about 2:30 this afternoon in a pasture in Camalote.

The skeletal remains of Nah were found in a feeder road about half a mile from the highway in the village, in a pasture, almost two months after he left home and failed to return.

The owner of the pasture told police that about 2:30 this afternoon, his workmen were cleaning the area when they found the skeletal remains of a person.

The police were notified and Nah’s family were told, and the group then went to the area, where they saw the skeleton.

The family said that they are convinced that the skeleton is that of Cayetano Nah because of the clothing and a utility bill in his name, that were found on the remains.

The Nah family told police that he was a taxicab driver, but his car was not functioning due to mechanical problems. Nah left his house in Camalote on the morning of February 2 to go to Belmopan, and did not return by 5:00 that evening, which was very unusual.

They knew something was amiss and they began to make initial search efforts and inquiries for him in the village, but he had not been seen.

At the end of the autopsy, Nah’s family will give their loved one a formal funeral service.