SMART 13 & Under semifinals and All Star game results 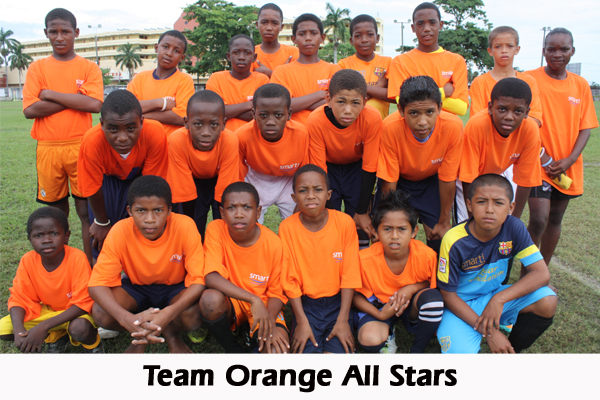 The 2nd Annual SMART 13 & Under Football Tournament had its semifinal games on Saturday, December 7, and then its All Star game on Sunday at the MCC Grounds. The finals will be this coming Saturday.

In the first semifinal on Saturday, #1 seed Brown Bombers bombed #4 seed Rising Stars, 4-0, with a goal each from Tyreek Muschamp, Sherwin Requena, Dion Cacho and Naheem Gentle. And in the other semifinal, Hattieville United did to City Boys what they had done to Brown Bombers in the finals last year, dealt them their only defeat of the season, by a 1-nil score. City Boys dominated possesion for most of the game, but it was a big “contra golpe” kick upfield from Hattieville defender Shemar Waight that created a foot race toward the City Boys goal, where Hattieville striker Mario Rivera managed to score what turned out to be the game winner at the 9th minute of first half. They played 30 minute halves in the semifinals; while it was 20-20 during the regular season.

The stage is now set for the 3rd place match and the championship final, which take place this coming Saturday, December 14, at the MCC, starting at 1:00 p.m.

There was also an All Star game played the following day, Sunday, featuring the best players in the tournament separated into two teams. Team Orange defeated Team Blue by a 3-2 score. Sherwin Requena, Michael Palacio and Eldon Byrd netted a goal apiece for Team Orange, while Tyreek Muschamp and Lyndon Flowers scored for Team Blue.

Chosen as MVP for the All Star game was Sherwin Requena, who was also the tournament’s leading scorer with 11 goals.

There is an absolute bundle of awesome talent waiting to be harnessed, molded and polished, and our glorious future in football is sitting right there among those youngsters we see hungry for guidance and nurturing in tournaments such as the SMART 13 & Under. Let’s get the Football Academy going. There is no time to lose.

This year’s finals feature the same two teams that met in last year’s championship. Hattieville United is the defending champion. It will be the tough Hattieville United defense against the awesome Brown Bombers attack. This is not a game to miss.