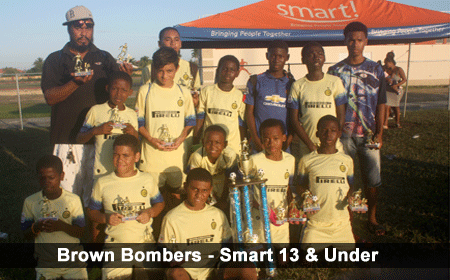 BELIZE CITY, Wed. Dec. 20, 2017–The Smart 13 & Under Mundialito 2017 Closing Season climaxed on Sunday, December 17, at the Marion Jones Sports Complex, where the third place and championship games were followed by the tournament awards ceremony.

In the third place game scheduled for 1:00 p.m., Hattieville River Side Boys got the 1-nil win over RG City Boys.

Next was the traditional exhibition match featuring coaches against officials, where the coaches prevailed, 2-1.

In the big championship game that followed, an early second half header by Brandon “Battery” Smith of Brown Bombers was the difference, as the Bombers held on for the 1-0 victory over a game BDF/Ladyville Rising Stars.

Immediately following the championship game, trophies and awards were issued by Smart representative Anthony Mahler, who congratulated all the participants and pledged his firm’s continued support for youth football. 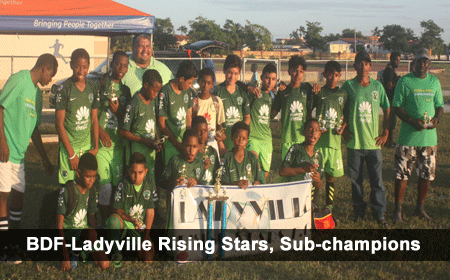