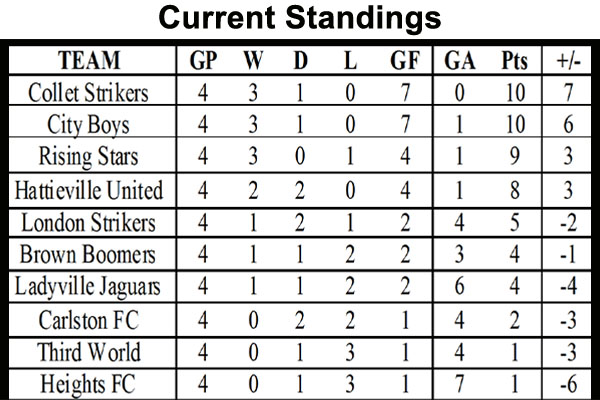 The 3rd Annual SMART 13 & Under Football Tournament continued with Week 4 games on Saturday, May 31, at the MCC Grounds. Three teams are still undefeated – Collet Strikers, City Boys and Hattieville United; last tournament’s undefeated champion Brown Bombers already has suffered 2 losses. Ten teams are in the competition, and after a single round-robin regular season, the top 4 teams go on to the knockout semifinals.

In game 1 on Saturday, Ladyville clipped Third World, 2-1, with goals from Trivon Bainton and D’Jon Canelo; while Jonah Chebat scored for Third World. In game 2, Collet Strikers dropped Brown Bombers, 1-nil, on a goal by Jomel David. Next, it was Hattieville over Carlston FC, 2-0, with a goal apiece from Christian Caceres and Jaheed Baptist. London Strikers and Heights FC played to a 1-1 draw in game 4, with Eshak King shaking the net for London Strikers, while Ranalf Witty netted for Heights. And in the last game of the day, Akeem Sutherland’s lone goal stood up to give City Boys the 1-nil victory over Rising Stars.