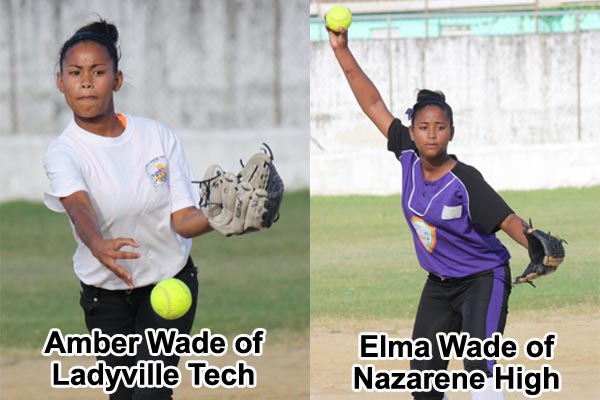 We have to apologize for not keeping you fully abreast of the developments in Belize District high school softball, which began their playoffs this evening at Rogers Stadium.

At the end of the regular season on Friday last, Nazarene High was undefeated for both the female and male teams. For the males, SJC won 5 and suffered only 1 defeat, that to Nazarene; while in the female category, Ladyville Tech also won 5 games and lost 1, to Nazarene High.

We are admittedly biased toward female softball, as we look forward to the day when our young men play baseball. SJC and Nazarene seem to have a rivalry going in the male division; but it is in the female category that the situation is absolutely intriguing.

A couple years ago, first former Amber Wade was the star of the winning Nazarene High girls softball team. After some personal difficulties causing her to leave school for a while, Amber resurfaced at Ladyville Technical, and soon she was leading the Ladyville Tech girls team into the top echelons of high school softball. Meanwhile, Amber’s younger sister, Elma had taken up the slack at Nazarene, where she soon blossomed into their new pitching ace.

What makes the situation really special, is that the coach of the highly successful Nazarene softball program, Alden Wade, is the father of both Wade girls, Amber and Elma.

Because of the Page System, Nazarene is not out of it yet. On Thursday, they will get to meet the winner of tomorrow’s clash between #3 Gwen Liz High and #4 Wesley College. The grand finals are set for Friday.

Wednesday is a day off; so, if you can’t make it to Rogers Stadium for Tuesday’s playoffs, make sure you don’t miss Thursday’s do-or-die match for the Nazarene High females. Results are not yet in for today’s male match-up between #1 seed Nazarene High and #2 seed SJC.