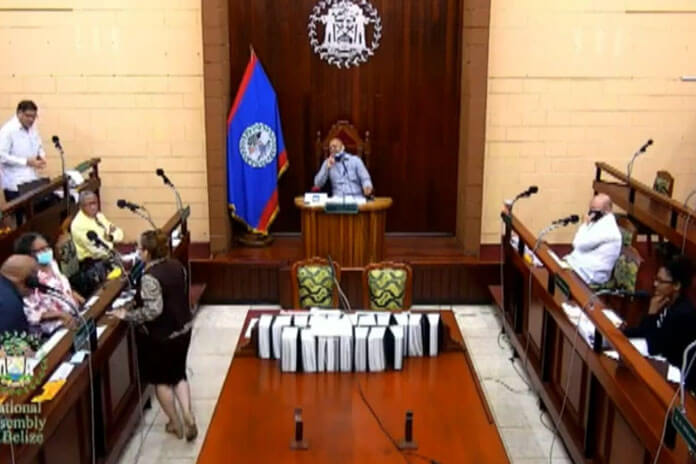 BELIZE CITY, Wed. July 1, 2020– The Senate met today to deliberate on four loan motions from the lower house of Parliament. Unlike the House of Representatives, where debates are often laden with insults and accusations, debate in the Senate, though passionate, is still far removed from the spectacle that has become characteristic of House meetings.

Some of the social partners took the government to task for yet another raft of loans; nonetheless, the four motions that were introduced and passed in the House last Friday, passed easily through the Senate, but not before some sparks flew between Government and Opposition senators.

The loan motions which were passed through the Senate for the most part represent initiatives by the government to acquire financing to stabilize the country during the fight against the COVID-19 pandemic.

Two Budget Supplementary Allocations and four loan motions were sent to the Senate with Cabinet’s recommendation.

The first loan motion was for US $15 million from the Caribbean Development Bank (CDB) COVID-19 Emergency Support. Then there was the CDB Enhancing Sugarcane Farmers Resilience for Natural Hazards Events motion, for the acquisition of US $1,013,000; as well as a loan for US $12 million under the Inter-American Development Bank Support to Vulnerable Populations Safety Net affected by Coronavirus in Belize; and a loan for US $1.9 million that will be received through the International Fund for Agriculture Development Rural Belize Resilience Project.

NGO Senator Salas, in discussing the loans, praised the bi-partisan effort between PM Barrow and Opposition Leader Hon. John Briceño. Senator Salas said that in light of the emergency facing the country, it would be best if the two mass parties would refrain from spending a lot of money on campaign material.

Senator Salas then noted that three months into this crisis, there is no economic plan.

PUP Senator Dr. Louis Zabaneh said that the government had focused its energies on the tourism industry, but that we must be fair and balanced, and realize that other sectors have been neglected.

Senator Zabaneh called out the government for its poor economic policy. “We cannot litigate ourselves to a higher prosperity,” he said, adding that “This government has borrowed $1.3 billion in new loans that has been taken on by this administration between 2008 and 2019.”

Senator Mark Lizarraga remarked that the point has been made that the loan motions would allow the government to preserve fiscal space. He stressed that the money being borrowed is a loan “that we are borrowing in the name of the little children, who will have to pay it back”.

“You see how long the repayment period stretches? We are hacking away these kids’ future, by putting them in debt before they even start to work,” said Senator Lizarraga.

“When you go to the IMF to borrow money, you have to have a plan. According to the IMF, what we are doing is not sustainable at all”, Senator Lizarraga continued.

Government Senator Aldo Salazar, who spoke next, in referring to the comments made by his fellow senators, declared that this is not the time for this “political nonsense.”

PUP Senator Isabel Bennett, referring to Senator Salazar, said “it is heart-wrenching to hear my colleague speak about politics … We come here to be accountable to the people.”

When he got another chance on the floor, Senator Zabaneh fired back at Senator Salazar, saying, “What you expect of us? We are here representing the People’s United Party. You want us to sing the praises of the UDP? “

Senator Zabaneh reminded Senator Salazar that the National Assembly is a part of our political structure.

PUP Senator Michel Chebat said that when the pandemic started in March, the Prime Minister said that he had a hundred million dollars to spend, and that the money is now “done and nobody has told us how it was spent.”

“Where did the money go? How that money is not accounted for? There are thousands and thousands of people without jobs. There has been no economic stimulus. Belizeans were made to stay home with little or no help … but yet one hundred million has been spent,” he said.

Senator Chebat, referring to the 12 million US dollars that were supposed to have been geared to help the 40 thousand persons who applied for assistance, said, “elections are three months away; this loan motion is elections money, Mr. President.”