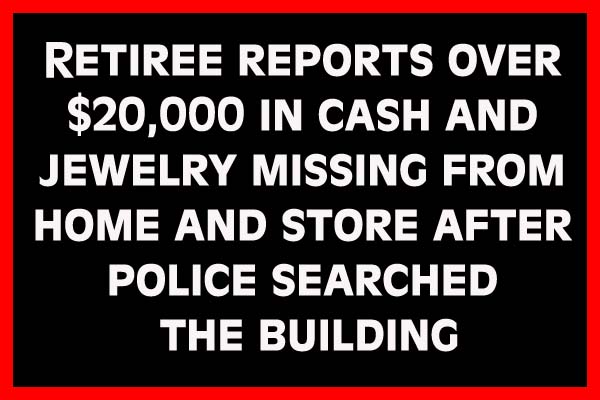 The Police Department confirmed today that a Belizean businesswoman, Carol James, whose common-law husband, Anthony Broaster, was detained more than a week ago, has filed a complaint with the Professional Standards Branch of the department that jewelry and cash have gone missing from her home after a police search was conducted at her residence on Central American Boulevard.

The police report did not indicate the value of the jewelry and the amount of cash reported missing; however, the businesswoman, visibly upset over what had transpired while she was in the US on a personal trip, has told our newspaper that it is in excess of $20,000, including a diamond bracelet, several rings and all the cash from the cash register of her boutique.

James, the ex-wife of former Police Commissioner David Henderson, also told us that police took her licensed firearm, as well as her cash receipt for $5,000, which proved that she had bought the gun from Brodies. The gun license was renewed this March for her birthday, she told us.

To date, said James, her gun has also not been returned. She said that she will fight because she does not want this type of abuse to happen to another Belizean, especially those who don’t have the means to defend themselves.

James had cut her trip short and returned home over the weekend, when she retained Ellis Arnold, SC, to handle the case.

Today’s police report was brief, only assuring that, “This matter is still under investigation.”

Amandala has confirmed that a group of officers attached to the Special Patrol Unit in Belmopan have been implicated in the incident, and the police are doing an internal investigation to ascertain the facts of the case.

Police Press Officer Raphael Martinez told Amandala that he had no information to indicate whether the alleged officers have been interdicted from duty, but that would be a matter for Police Commissioner Allen Whylie to decide once the relevant information has been obtained.

James told us that last Wednesday night, police visited her home on the Boulevard and commenced a search. At home at the time were her common-law husband, Anthony Broaster, and her nephew, Shane, who was visiting from the US for the holidays. Police asked Broaster if he had anything to declare, and he informed them of the gun, said James.

Police then took the gun and the documents and held him with the intention of charging him for possession of an unlicensed firearm, she added. Martinez said today that no charges were pressed against Broaster.

The officers also alleged that a small quantity of marijuana was found at the home; however, James said that both males in her home indicated that they had no drugs and alleged that it was planted there by the officers.

James said that the police officers had her common-law husband and nephew held while the others searched all over the two floors of her home, including her boutique, so they could not see everything the police were doing while inside the building.

A statement from police tonight, she said, suggests her neighbor was responsible for the missing cash and jewelry; however, James believes that that’s a cover-up by police.

The officers left the premises with both men, and Broaster left the keys with a neighbor, Elena Arnold, JP, who told Amandala that two police vehicles had gone to the home and left with the two men. She told the police not to hurt them, and identified herself as a Justice of the Peace.

According to James, police released her nephew without charge that same night, after he paid them $500, which was withdrawn that night from an ATM. James said the cash was returned to them after the young man filed a complaint with the Police Department.

Broaster was released on Tuesday; however, according to James, his $1,500 gold chain was not returned to him.

James said that she still does not know why police went to her house to conduct the search. They did not present a warrant, we were told.