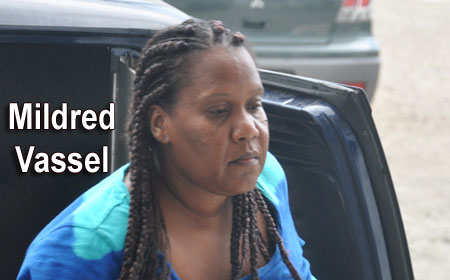 BELIZE CITY, Wed. Aug. 10, 2016–Late this evening, a Belize City woman was arraigned on charges that she made false representation to the Belize Social Security Board in order to collect sick benefits for which she was not entitled.

Mildred Vassel, 45, an employee of Ready Call Center, located at Mile 13 on the Philip Goldson Highway, was hit with 13 counts of making a false representation to claim sickness benefits.

Vassel, a resident of 6 Fabers Road, was brought to the Magistrate’s Court on the strength of a bench warrant that Social Security had secured from the court.

Vassel appeared before Magistrate Carlon Mendoza, who read the 13 charges to her.

Allegations are that between February 26, 2015 and November 22, 2015, she made claims for sickness benefits a total of 13 different times.

Social Security is further alleging that within that period, Mildred Vassel knowingly made a false representation and produced or furnished, or knowingly allowed to be furnished or produced, false declaration claims for sickness benefits.

It is further alleged that she visited a doctor and reported sick between those periods and then later brought in sick paper documents, knowing that she was not sick.

During all those periods, it was revealed, she was working at Ready Call Center and collecting her salary.

After the allegations were read out in court to Vassel, she said that she did not agree with the facts. As a consequence of her not agreeing with the allegations, Magistrate Mendoza entered an equivocal plea of not guilty on her behalf and the case was adjourned to September 5.

The prosecutor in the case was Inspector Lawrence Lopez of the Social Security Office.

Disclosure was ordered by the court for September 5, and the trial was set to commence on September 19.