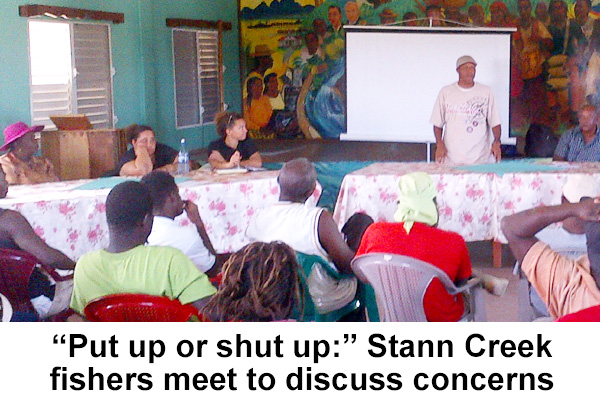 “Put up or shut up,” chairman McKenzie tells fellow fishers

Over 115 fishers of the Stann Creek District have signed on to a petition sent to Fisheries Minister Lisel Alamilla by the Stann Creek Fishermen Association (SCFA), in which they have registered their “discontent” with the way fisheries authorities have been handling the applications of Dangriga fishers to obtain licenses under the managed access regime for the Glovers’ Reef Marine Reserve (GRMR).

The association, formed last May, also said that there is a need for more proportional representation on the GRMR Managed Access Committee.

The association said that the GRMR is situated at “Dangriga’s front door,” yet, they claim, fishers from the area have been disenfranchised.

The concerns over fishing access were reiterated by the SCFA members at their first annual meeting held on Sunday, February 2, 2014.

Some fishers signed the petition at the SCFA’s first annual meeting held on February 2, 2014, at which members were urged to unite and “put up or shut up” if they are to make progress in addressing their concerns.

The petition was sent to the Fisheries Minister on Friday evening, and Minister Alamilla responded via e-mail before the close of business this evening, Monday, saying that her CEO, Dr. Wendell Parham, has been advised to meet with the fishermen to hear, and hopefully address their concerns.

We understand that the association is also looking at developing alternative livelihoods for the fishers of Stann Creek.

Pro-tem chairman of SCFA, Mark McKenzie, told Amandala that they are not trying to be vindictive or belligerent, but they are at the point where they need intervention, because they fear that they will be weeded out of the industry when managed access is rolled out in other areas such as the South Water Caye Marine Reserve.

Amandala understands that the National Garifuna Council (NGC) is also looking at having a symposium to ventilate concerns over the exercise of “traditional maritime fishing rights.”