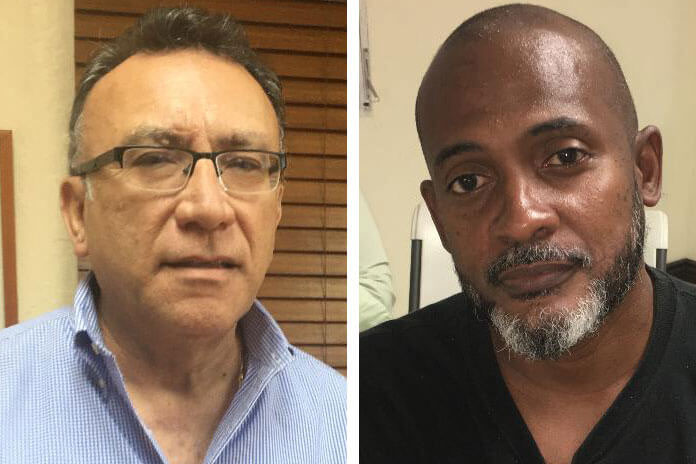 BELIZE CITY, Mon. Mar. 2, 2020–This morning, the stevedore members of the Christian Workers Union (CWU), in a bid to get the attention of the receivership of the Port of Belize Limited, (PBL), embarked on a peaceful protest at the Port of Belize Ltd. compound on Caesar Ridge Road.

The CWU issued a press release this morning under the caption: “CWU draws the line with PBL”.

The release said, “Today Christian Workers Union (CWU) Members are protesting to indicate the complete failure of the receivership at the Port of Belize Ltd. (PBL), failure compounded by gross discourtesy, and disrespect.”

The release added, “…that two multinational goliaths, Santander and ASR, intend to consolidate their interests and take raw sugar exporting through the Big Creek Port. In the wake of this neoliberal romance, there will be devastating economic losses to one hundred and fifty (50) Stevedores.”

According to the CWU, approximately a third of the stevedores will become unemployed and those who remain will experience a 40 percent reduction of their salaries. “The writing is clearly on the wall that our Members are on a sinking ship with sugar,” said the press release.

The CWU release continued saying, “We know that ASR has had the decency to engage its employees who will be affected by this move in the North. Multiple gratuity options are being presented to them.

“But here in Belize City, the PBL receivership has completely ignored our members. Today, we are demanding a signed agreement for compensation for our Members for the years that they have worked sugar, once they have been made redundant. We will not wait until the last sugar boat is loaded; we do not trust the present management of PBL.”

“Staff Members at PBL that CWU represents are also taking the time to protest the blatant disrespect and insolence of the management in completely ignoring their proposals for a new Collective Bargaining Agreement (CBA) that was sent to them last year,” the release further stated.

The release ended with the statement, “Our members’ backs are against the wall. There is no choice but to stand up, defend and secure members’ survival and economic dignity.”

President of the CWU, Evan “Mose” Hyde, told Amandala that he was at the Port of Belize this morning in solidarity with CWU members.

“We are not doing anything until PBL engages us and talks to us about our demands,” Hyde said.

We asked Hyde to explain in further detail what the union is demanding.

We asked Hyde what has been the response of the PBL.

“They want us to become impatient and that would give them the right to make it a wrongdoing situation,” Hyde pointed out, “but we will stand on the moral high ground.”

The receiver for the company, Arturo “Tux” Vasquez, told reporters today, “I heard a bit of what they [stevedores] are complaining about. But it is my understanding that the exportation of sugar will not stop coming through the Port of Belize.”

Vasquez said that it is his understanding that BSI was conducting an experiment last year. “We have a ship starting in a couple of weeks. My understanding is that it will continue as it has been going. But they have to understand that BSI is looking to see how they can do the loading of these ships in a more economical way,” he said.

Vasquez explained that in 2017, Belize lost its preferential quota and BSI has to be as competitive as any other producer.

Vasquez said that those who are familiar with the loading of the ships will know that it is a very antiquated system. “It takes forever to load a ship, and BSI has been trying over the years to see how they can better this system. It has come to a point where it is no longer sustainable to do”, he said.

Vasquez said, “from what I know, the sugar will continue this year.”

Vasquez also said that the Port is in the process of building a cruise facility, “but that will come over the years.”

“At the end of the day, these corporations are looking at efficient ways to operate, and there is nothing that we can do,” said Vasquez.

“The Port will also lose money, but there is nothing that we can do at this point. BSI is about to issue a proposal to the stevedores to be paid for what they load. Right now you are being paid for a shift, and you are allowed to load so much. That’s basically how it’s being done right now,” Vasquez said.

Vasquez was asked how he was going to address the fact that the stevedores are outside protesting.

We asked Vasquez to address the question of the Collective Bargaining Agreement that the CWU said PBL is not addressing.

“A bargaining agreement has existed since 2002. The cost of living increase and bonuses have been paid, and none of that has changed,” Vasquez said.

Vasquez said that there has been no Collective Bargaining Agreement with the stevedores and this has been for more than eight years, before he took over the Port, but there is an agreement with the office staff.

Feature photo: Arturo “Tux” Vasquez, the receiver for the company and Evan “Mose” Hyde, President of the CWU