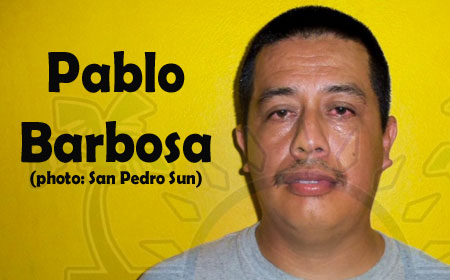 SAN PEDRO, Thurs. Mar. 5, 2015 –Pablo Barbosa, 35, of San Pedrito, San Pedro, a businessman and a storeowner, died after a gunman entered his store and shot him four times in his head and chest. A customer, Humberto “Betito” Alcoser, who was in the store buying, was also shot by the gunman in the neck, then the gunman escaped out of the store, without stealing anything.

Police said that they were on patrol in San Pedrito about 8:00 Tuesday night when they got a call that there was a shooting in a different area, and they left San Pedrito to investigate the report.

Shortly after they left the area, however, about six gunshots exploded, sending the residents of the area running for cover.

Police went back to San Pedrito and went to Barbosa’s Store, where they found the storeowner dead and a customer injured. Alcoser was rushed to the San Pedro Polyclinic, and there, Barbosa was declared dead on arrival.

Alcoser was then rushed to the Karl Heusner Memorial Hospital, where he has been admitted to ward in a critical condition.

Police said that they now believe that the call was a diversion, and they learned, after investigating, that Barbosa was the target.

Police believe that Barbosa’s death was drug-related, and that the killer went to his store just to kill him, execution-style. Police have been given a description of the man witnesses saw running out of the store, but he was wearing a mask.

Barbosa is the 5th murder victim for 2015 in San Pedro, and the second person to be murdered in less than a week on the same street, just two houses away from where Daniel Espat, 2, was shot and killed and his mother injured while he slept with his parents.

Police are seeking public assistance to capture the killer. Anyone that has information that can assist the police is asked to call the nearest police station at 911, or Crime Stoppers Belize at 0-800-922-TIPS.

Manza out, Musa out, no DHS?