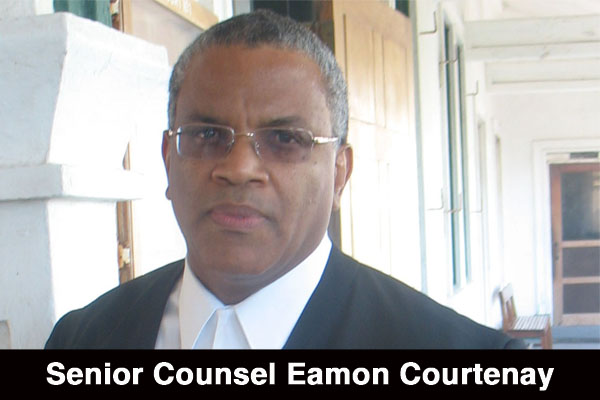 BELIZE CITY, Wed. July 6, 2016–The half-a-billion-dollar tab which Belizeans will have to pick up after an arbitration award handed down last week against the Government of Belize, and in favor of a group of companies controlled by British billionaire Michael Ashcroft, has sparked much public discourse and debate and this morning, one of Ashcroft’s leading attorneys in Belize—Eamon Courtenay, SC—unexpectedly added his voice to those who have castigated the Government for, as he put it, giving Ashcroft exactly what he had asked for.

“At the end of the day it was a question of money,” Courtenay said.

Curiously, Courtenay took off his lawyer’s hat and donned his political hat as senator for the Opposition People’s United Party (PUP) and member of the party’s executive.

Rowland Parks, the Amandala reporter who covered the story back in September 2015 when an initial settlement was announced only months before the general elections, has indicated that at the time, the Opposition, led then by former Attorney General Francis Fonseca, did not protest.

Today, however, Courtenay blasted Barrow for making a one-on-one deal with Ashcroft in Miami which, he said, amounted to a surrender to Ashcroft’s original demands.

The surrender in Miami by the Prime Minister to all Ashcroft’s demands is really beyond anything that the Belizean people should accept, Courtenay told the press today.

So what were those demands? The Government of Belize has said that Ashcroft wanted $10.23 per share for the 45 million shares that the Government took at nationalization in 2009; however, the Government offered $1.46 a share, 2 cents more than the valuation done by NERA. 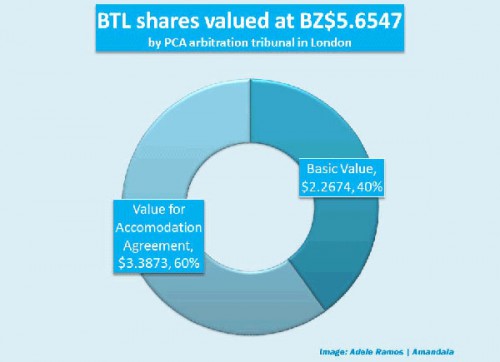 The parties were oceans apart, and consequently, the Government sought the court’s intervention to determine the value of the acquired shares, but the British investor also triggered foreign arbitration under a 1982 bilateral treaty to protect investments by UK nationals in Belize.

The dispute has been about a series of agreements which former Prime Minister and ex-PUP leader, Said Musa and Fonseca, then Attorney General, gave to the Ashcroft-controlled BTL between 2005 and 2008. When the Barrow administration came into office, it renounced and repudiated those agreements.

If it is indeed the case that the accommodation agreement was the problem, the proper thing was to have gone to court and to seek a declaration, Courtenay told us. If the court had found it to be unlawful, he said, the Government would not have to pay.

Courtenay said today, though, that the Barrow administration never went to court to challenge those agreements; and although they were challenged by the Association of Concerned Belizeans (ACB), now defunct, and Senator Godwin Hulse; as well as by the Public Utilities Commission (PUC), “the Government has never allowed them to come to trial.”

The accommodation agreements are the crux of the dispute; and the arbitration tribunal found that they should account for 60% of the total value of the company, and it tagged on 8.3% interest to the total award as of August 25, 2009.

Courtenay indicated that he is befuddled by Barrow’s decision to concede to Ashcroft right before a ruling was to have been handed down by the Caribbean Court of Justice (CCJ), after both sides had made full arguments in the matter and after accruing major legal bills.

Some may be of the view that Courtenay’s comments are hypocritical, since he was the attorney fighting Ashcroft’s case. In answer to that, Courtenay said that he is speaking not in his capacity as a lawyer but complaining as PUP Senator, a member of the PUP executive and a Belizean, and he is entitled to criticize what was negotiated by the PM, he insisted.

Answering suggestions that he has become wealthier from fighting Ashcroft’s legal battle, Courtenay said, “no one is going to silence me, regardless… I am a professional and I earn my fees.”

He said that that is how he makes his living and he makes no apologies.

We asked Courtenay whether the accommodation agreements, in his view, are fair for the government and people of Belize. He said that an agreement is fair depending on who negotiates it and what their objectives are.

“Whether or not an agreement is good or bad is not the issue; it is whether or not it is valid,” Courtenay told us.

He said that Barrow did not appeal the initial arbitration ruling on the accommodation agreement to the High Court in England, and, “today, we are having to pay hundreds of millions of dollars,” for something that Barrow had said was unlawful, when he could have used the Public Utilities Commission to regulate it or he could have passed laws to make the situation different.

“What we had was litigation and settlement between two men where no one else was present and now we have to pay the price,” he said.

The matter originated in a series of agreements between the former leaders of Courtenay’s party and Ashcroft—a sort of bailout deal in which the Government persuaded the company to acquire $19.2 million worth of assets formerly owned by a group of companies owned by Glenn D. Godfrey, a former PUP minister. It was evidently an accommodation to facilitate the then political administration and the then majority owner of BTL.

The assets had been tied up in the controversial mortgage securitization program. The Government, under the Musa administration, financed the purchase of those said assets by BTL and at the time the matter fell into dispute in 2008, after the Barrow administration took office, the Ministry of Finance had indicated that the balance on the loan note was $10 million. There were also questions over whether BTL still held those assets that sparked the accommodation agreements.

It has since been revealed that the agreements amounted to a 30-year concession which included a government-guaranteed 15% rate of return and tax set-offs where guaranteed profits were not realized.

The company was also allowed to block Voice Over Internet Protocol (VoIP), restricting the ability of Belizeans to make cheaper calls outside BTL’s system. 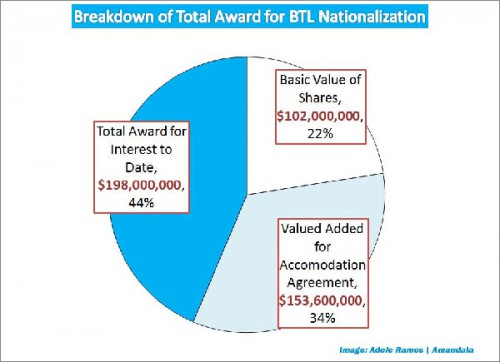 Since 2008, the agreements are no longer in effect, but the tribunal did award a sizable sum for them, amounting to over $270 million in value and accrued interest, in its recent decision. The remainder—only 40% of the award—was attributable to the basic value of the shares and the interest accrued. The share value alone is only $102 million, still substantially higher than the original offer of roughly $65 million made by the Government after the nationalization.

When Barrow and Ashcroft reached a settlement last year, Government paid Ashcroft the $65 million as an initial deposit; and on Tuesday, July 12, 10 working days after last Tuesday’s ruling, another $195 million is reportedly due.

The final payment, the other half of the balance, is due in 12 months, also at 8.3% interest.