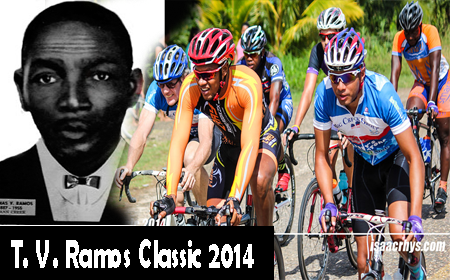 In the Junior category, first place went to Nashen Ysaquirre; second was Patrick Williams; and third was Darien Anderson.

For the Weekend Warriors, first place was taken by Robert Mariano of Team Digicell; second place went to Dean Belisle; and third went to David Yearwood of Team Lampaz.

All categories had a very tight race.

The first Dangriga rider to come in was young Randy Petillo, Jr., who is a Junior rider, and he received $50.00 cash and a jersey set.

This year’s T.V. Ramos Classic was a big success, with a total of over one hundred and fifteen (115) cyclists taking part from all over the country of Belize.

The Dangriga Amateur Cycling Association would like to give a big, big Thank You to the Cycling Federation of Belize, who did a wonderful job, and also to the Weekend Warriors executives and everyone else who assisted in any way to make this year’s Annual T.V. Ramos Cycling Classic a huge success.

NEXT YEAR WILL BE EVEN BIGGER!!