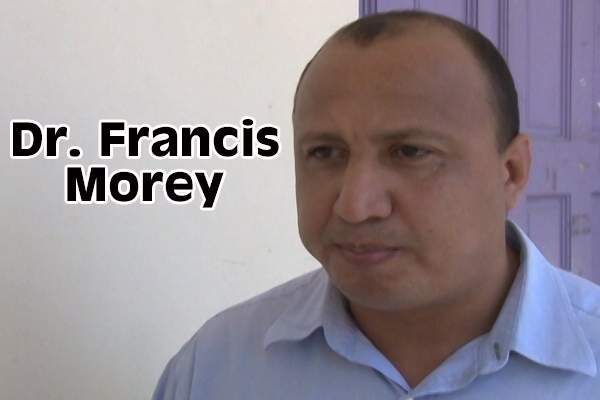 In commemoration of World Tuberculosis Day – which will be observed next Monday, March 24 – the Ministry of Health organized a workshop at the ITVET Compound in Belize City today, which was aimed at keeping nurses and caretakers “in the know,” as it relates to dealing with patients who contract the disease.

The participants received advice on how to deal specifically with isolated cases of tuberculosis – also known as “TB,” and how to administer medication to patients based on the severity of their condition, among other presentations which were conducted by the workshop’s facilitator, Dr. Francis Morey, who is also the director of the national tuberculosis program.

Morey told Amandala about today’s undertaking as well as some of the problems associated with eradicating the curable, but deadly disease.

He said, “This activity is being held to increase awareness in regards to the existence of TB in our population and how to diagnose it, treat it early, and hopefully decrease the number of individuals who are affected by tuberculosis in our country.”

According to Morey, the purpose of the activity is to increase the awareness of healthcare workers, through an infection control component in regards to what nurses and caretakers need to do when there is a TB patient who has been diagnosed, and what they need to do when it comes to actually protecting themselves when examining a person, such as educating a TB patient on how to cough.

Tuberculosis is an infectious and many times fatal disease caused by a bacterium that affects the lungs and is characterized by coughing, sneezing, and spitting. It typically affects the lungs, but can also affect other parts of the body.

The Ministry of Health states that there were 129 new cases of tuberculosis in Belize in 2013, of which 5 were extra-pulmonary (not occurring in the lungs) and 26 were co-infections with TB/HIV.

The greater number of individuals affected, according to the Ministry, were those between the ages of 20-59, and of all recorded cases, there were a total of 17 deaths from TB for 2013.

Although healthcare providers are normally the frontline people who lead the way in bringing about much-needed mitigation in the incidences of TB, Morey explained that the input and involvement of those who suffer from the disease are equally important. He elaborated more about the disease and spoke about those who are most at-risk of contracting TB.

“TB is a curable disease which is transmitted when a person who actively has the disease coughs or sneezes in the air. Those who are around him/her can become infected, but will only become sick if they have any other conditions that affect their immune system, such as diabetes, HIV, kidney failure and lung problems such as asthma, or if they have been a longtime smoker or have some type of cancer. These individuals have alterations in their immune system and once exposed, they can become infected with TB”, Morey stated.

He also told us about one of the measures which was implemented by the international public health agency, WHO, to control the prevalence of TB.

“Another important issue”, cited Morey, “is the Adherence Component that our healthcare workers should exercise – DOTS or Directly Observed Treatment Strategies are recommendations that the World Health Organization (WHO) specifies and strongly advocates, which state that we [healthcare practitioners] must ensure that a TB patient gets his/her medications on a daily basis and adheres to it.”

WHO, in its 2013 Global TB Report, announced that of the average 9 million people who become infected with TB every year, at least one-third, or 3 million TB patients – mostly from the world’s poorest and vulnerable communities – are “missed” by public health reporting systems, which has been the case for at least the past 6 years.

In line with possibly reducing or diminishing those statistics, the theme for this year’s Tuberculosis Day is “Reach the 3 million – A TB Test, treatment and cure for all.”