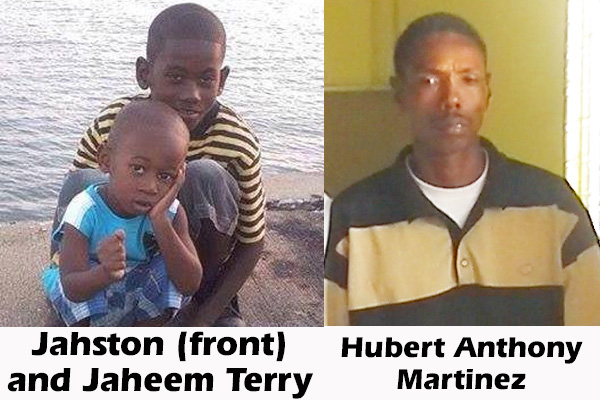 When they saw the dead child, 4, the crowd was so enraged that they wanted to kill the driver and burn the van and his house; driver charged with manslaughter.

The Terry family of Hattieville is devastated, mourning the sudden death of their son, Jahston, 4, a preschooler attending the Building Block Preschool, and is also praying for the recovery of their elder son, Jaheem, 10, a student of St. Ignatius Primary School who is presently recovering at the Karl Heusner Memorial Hospital from a broken left ankle.

Yesterday evening at about 4:30, the two brothers were slammed by a passenger van that drove onto the sidewalk where the two children were walking in front of Belizean Chinese Restaurant in front of the BTL Constitution Park on Cemetery Road in Belize City. The younger brother died.

The driver of the van, Hubert Anthony Martinez, 36, a Belize Defence Force civilian driver of Perez Road in Ladyville, was remanded to the Hattieville Prison this evening after he was denied bail by Magistrate Hettie Mae Stewart.

Martinez was charged with manslaughter by negligence; causing death by careless conduct; negligent wounding; driving without due care and attention; and driving a motor vehicle with alcohol concentration above the prescribed limit.

Martinez was apprehended on the scene and was charged with the aforementioned charges.

When he appeared in court this evening, he had no legal representation and no pleas were taken from him because the charges are indictable and his case will be heard in the Supreme Court.

There was no objection to bail, but the magistrate denied Martinez bail based on the prevalence of the charges, and the serious nature of them, even though Martinez begged to be offered bail since he has three children and is the sole breadwinner for his family.

A witness to the accident told Amandala that the front end of the van, license plate BZ-C-34128, hit the boys and the back wheel rolled over the head and upper body of the preschooler, bursting his head and severely injuring his upper body. His older brother only had his left ankle broken.

A taxi operator who operates from the taxi stand in the BTL Constitution Park in front of the Pound Yard Market, said that he was standing on the sidewalk by his car when he saw the white passenger van drive onto the sidewalk to bypass the traffic congestion from the junction of Cemetery Road and Johnson Street.

The two children were walking on the sidewalk in front of the Chinese store towards the bus stop when the van knocked them down, and the rear wheel rolled over the preschooler.

A taxi operator, known to everyone as “Pinto,” said that the driver could not get back to the road, because taxi cars were parked on the roadside by the sidewalk, causing the van to drive on the sidewalk through the narrow area on the sidewalk, with the cars parked on the side of the road. After knocking down the children, the van drove on and knocked down the taxi sign at the entrance of the Pound Yard Market.

People in the area scrambled for safety to get away from the oncoming vehicle driving on the sidewalk. He said that he immediately reacted, and ran after the van, and slammed the back of the vehicle to alert the driver, because all the windows were up.

The driver finally stopped about 200 yards away. He was then taken out of the vehicle and showed the dead boy on the sidewalk, and that was when the driver claimed that the brakes failed.

Pinto said that after the young boy was killed, the elder brother walked into the Chinese store, where he became pale, started to tremble, as he began to look at his brother, who was lying on the sidewalk. He was then taken to the hospital. The family told Amandala that his left foot is in a cast, but his ankle was the part that had been broken.

Police responded to the tragedy, took the driver into custody, and processed the scene. There was a large crowd of over 400 people who came to the park to see what was happening, and emotions ran high when they saw the preschooler dead on the sidewalk. Some began to cry when the tiny body was lifted up in a sheet which had become soaked with blood. The child was put into the back of a police mobile unit and taken to the morgue, where he was declared dead on arrival.

However, the police ensured the protection of the driver in face of the hostile crowd; and, remarkably, no shots were fired.

When police got into the van to drive it away to the station, the crowd again reacted, saying that the van should be burned because it had killed an innocent child.

Police, however, managed to drive the van slowly away. The officer who was driving away the van tested the brakes, and the van stopped well, almost causing the police mobile unit that was travelling behind it to crash into its back. The exercise dispelled the claim of the driver that the van did not have proper brakes.

Also, when the driver was put into the police mobile unit to be taken away, the crowd tried to get a hold of him, but the police drove away.

Another taxi operator, known as Jimmy, told Amandala that the van came down Cemetery Road towards the Pound Yard Bridge area, but at the junction of Johnson Street, a vehicle stopped suddenly. That was when the van’s driver drove up the sidewalk to bypass the traffic, hitting the children.

Their father was in Corozal, and immediately headed to the city to be with the family in the time of the tragedy.

Many have said that the death was senseless, because the driver should not have driven on the sidewalk.

An official police report stated that at about 4:20 p.m. on Wednesday, December 4, they saw the body of a child on the sidewalk and a White Ford Triton V8 van with license plate BZ-C-34128 was seen about a hundred feet away from the body in the middle of Cemetery Road.

Police said that Hubert A. Martinez, 36, of Perez Road, Ladyville, Belize District, was driving the van on Cemetery Road from the direction of Magazine Road towards West Collet Canal, but lost control and drove over the sidewalk, hitting both Jaheem Terry and Jahston Terry. The 4-year-old reportedly died on the spot, while his brother, Jaheem, complained of pain in his left ankle.

Jaheem Terry’s injury was certified as wounding. Urine samples were obtained from Hubert Martinez for analysis.

Onlookers who looked into the van reported seeing beer bottles in the vehicle.

The body of Jahston Terry was transported to the Karl Heusner Memorial Hospital, where it was pronounced dead on arrival at 5:15 p.m.