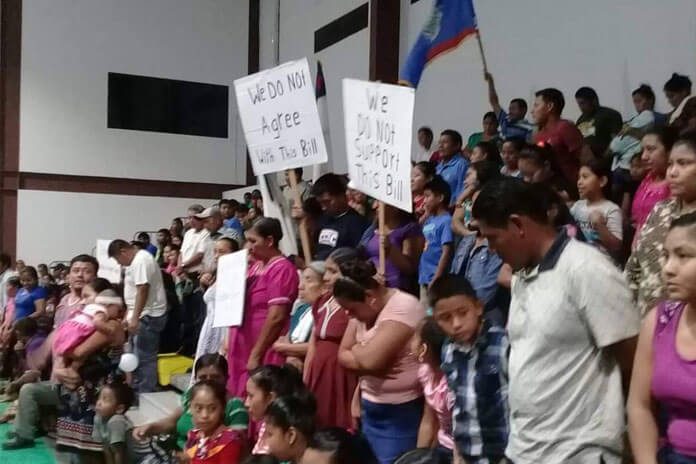 BELIZE CITY, Thurs. Jan. 16, 2020– The National AIDS Commission (NAC) has collaborated with the Caribbean Partnership against HIV & AIDS (PANCAP), the Human Dignity Trust and the Special Envoy for Women and Children to create a bill that will seek to legally protect minority groups against discrimination in the country.

The Equal Opportunities Bill, as it is called, highlights nineteen variations of discrimination that have affected a multitude of Belizeans on a daily basis. The drafters of the bill have been researching these matters for over a year and have embarked on a countrywide tour since Saturday, January 11, to conduct consultations and shed light on the specifics of the bill.

A press release issued by the committee indicates that the bill is being developed “using the CARICOM Model Anti-Discrimination Bill with the addition of race, religion, national origin, sex, sexual orientation, age, health status or other grounds against discrimination.”

While the committee has said that their sole intent in drafting the bill is to create a more inclusive society for all, there are a number of Belizeans who are skeptical about its implications. The members of the National Evangelical Association are concerned that the gay community is classified as one of the minority groups being protected.

Their perspective is that such a bill would be used to limit the rights of individuals and associations who are not in support of homosexuality. Furthermore, they are concerned that persons who express their rejection of gay rights will become legally guilty of hate speech, and suffer many consequences, including being fined and in some cases, put in prison.

These pastors and other critics were addressed directly during one of the consultations held in Dangriga, as questions and concerns were presented by the audience. During the committee’s media rounds, chairwoman of the NAC, Hon. Laura Tucker-Longsworth, addressed the Evangelical Association’s concerns.

7News quoted Longsworth as saying, “It’s quite a bit of misinformation there. We need to go back to our Constitution, and to understand that we have fundamental rights and freedoms, and the bill is created to bring that to life, to flesh that out, and to give us all, every citizen of country —that’s why this bill is so very important.”

A large number of residents in southern Belize also do not support the Equal Opportunities Bill. At Wednesday night’s meeting, the audience immediately rejected the bill and tensions became high. This resulted in UNIBAM’s Executive Director, Caleb Orozco, needing to have police escorts to leave the building.

Despite these tensions, the draft of the bill is completed and the consultations are the last phase in trying to get the public to be onboard with the bill, as well as to address any concerns before the bill is presented to the Cabinet.