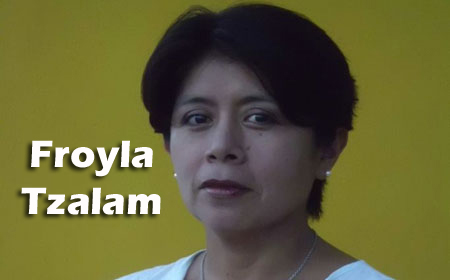 BELIZE CITY–Under Belize law, landowners receive 5% of the royalty payments made to the Government of Belize, which, in turn, is 7% of oil proceeds. That works out to 35 cents for every $100 earned, which by comparison is not much, but the Maya of Toledo, whose communal land rights claim is being fervently resisted by the Government of Belize, say that they want more than that razor thin slice of the petroleum pie.

Currently, US Capital Energy is drilling in Toledo inside the Sarstoon Temash National Park, and the Government of Belize has expressed confidence that a commercially viable supply of crude is available there.

Froyla Tzalam, Executive Director of the Sarstoon Temash National Park, told Amandala that the board met last Wednesday and the leaders from the buffer communities around the park, which mounted a legal challenge last year, want to pursue court mediation, ordered by Supreme Court Justice Michelle Arana last year.

“We will stick to the mediation process until told otherwise,” said Tzalam.

She is concerned, though, that the Government does not acknowledge them as landowners.

The SATIIM executive director said that it’s not too late to continue with mediation, even if a commercial oil find is declared in the weeks ahead, as their core issues, including the lack of jobs in the south, remain the same.

Tzalam said that when Mexicans came to set up the drill rig, some Maya leaders had conversations with them and found the Mexicans, who are skilled workers, were being paid as much as US$10 an hour while unskilled workers were paid in the region of BZ$3 an hour, doing security work.

“We cannot say finding oil is going to create employment for everybody,” said Tzalam, noting that specific skill levels are required.

SATIIM’s Community Mobilizer, Martin Cus, told Amandala that the community leaders would like to continue with the court-ordered mediation.

“The leaders say law should be respected,” he said.

Cus said that the Supreme Court decision made in 2013, calling on the Government of Belize to undertake consultations with the Maya, has not been respected, and neither has the court’s order for mediation been fulfilled.

In fact, the Government of Belize contends that the mediation could not proceed, in the face of its application to appeal the Supreme Court ruling of 2013.

Cus said that earlier today, a woman who said she lives in Toledo called the SATIIM office to tell them that Belize Natural Energy is being contracted to haul oil from the national park. He said that they will look into it, as they cannot assume this is a mere rumor.