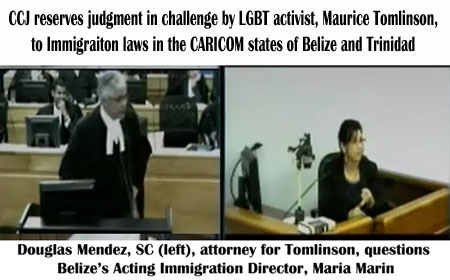 PORT OF SPAIN, Trinidad, Wed. Mar. 18, 2015–Belize’s Acting Immigration Director Maria Marin appeared in the witness box at the Caribbean Court of Justice (CCJ) in Port of Spain, Trinidad, on Tuesday, March 17, 2015, as the country’s key deponent in the case brought against Belize by LGBT activist, Maurice Tomlinson, a Jamaican lawyer who is in a same-sex marriage, who alleges that he has refused to visit Belize after learning that immigration laws here prohibit the entry of homosexuals.

Tomlinson—who was represented in Jamaica by Douglas Mendes, SC, a Trinidadian who served until last year as a judge of Belize’s Court of Appeal—is also challenging Immigration laws in Trinidad, under a consolidated claim at the CCJ, which has merged the Belize and Trinidad cases. The essence of Tomlinson’s complaint to the CCJ is that the laws in Belize and Trinidad violate his right to hassle-free movement in CARICOM, guaranteed under the Revised Treaty of Chaguaramas.

However, counsels for both Belize and Trinidad told the CCJ that Tomlinson had traveled freely to both countries on multiple occasions and has never been bothered by Immigration officials.

Marin gave evidence in court that back in 1998, Belize had actually admitted 700 homosexuals who came on a cruise ship, MS Leeward, and she told the court that the country has a long established policy of not denying entry to homosexuals.

Marin said that the law which Tomlinson is disputing has been interpreted by her department to mean that only homosexuals who gain money from their homosexual activities fall under the category of prohibited persons.

Mendez submitted to the CCJ that the law on the face of it prohibits three separate categories of persons: prostitutes, homosexuals, and persons who profit from homosexuality and prostitution. However, Belize’s position, articulated at the CCJ, is that the provision applies to homosexuals who profit from those activities, and not all homosexuals.

Nigel Hawke, Crown Counsel for Belize, told the CCJ that there is evidence before the court of the state of Belize exercising a policy that is consistent with its CARICOM treaty obligations.

During the CCJ hearing, it was revealed that Tomlinson had visited Trinidad and Tobago on at least four occasions without any hindrance.

However, in alleging that LGBT persons have faced immigration challenges, Tomlinson cited, in his testimony on Tuesday via teleconference at the Jamaica Supreme Court—since he now refuses to visit Belize and Trinidad—the case of a Belizean transgender man who goes by the name Mia Quetzal, claiming first that she was denied entry in Trinidad. But after being challenged by counsel for Trinidad, Seenath Jairam, he agreed that Quetzal, whose passport says that he is male, but who appeared at Immigration in Trinidad attired as a female, was actually admitted to Trinidad.

Justice Adrian Saunders noted that the applicant had only cited the case of Quetzal from Belize and the American singer, Elton John, who was required to get a special permit before visiting Trinidad in 1997, as examples where free movement was not accorded to a homosexual, but Saunders said that the case of Elton John is not really relevant to the CARICOM context.

Saunders furthermore noted that Tomlinson’s case had not pinpointed any other instance of cases where homosexuals have faced immigration issues since Independence.

Mendez, in arguing Tomlinson’s case, said that although immigration officials in Trinidad had not applied their laws which allegedly prohibit the entry of homosexuals, there is nothing to stop them from changing their mind about that policy in the future.

Tomlinson is asking the CCJ to strike down the provisions of the Immigration laws in Belize and Trinidad, which he says close the door to homosexuals.

Hawke said that Tomlinson is suggesting that the CCJ “should take out its judicial bullwhip and say to Belize, ‘Look, you’ve complied but look you still have law there, [and that] somehow you should be beaten with bullwhip because you still have that law…’”

Hawke also told the court that in Tomlinson’s own witness statement to the CCJ, he had indicated that after Belize became party to the 2007 conference decision, Tomlinson—who has a son with Belize’s former acting Solicitor General, Michele Daley, who left Belize in 2013—had actually visited Belize on different occasions. Hawke noted that Tomlinson referred specifically to 2011, and Tomlinson had himself admitted that he traveled to Belize without any prohibition whatsoever. Hawke insisted that Belize had always complied, in respect of the migration of CARICOM nationals, with its obligations under the Revised Treaty of Chaguaramas.

“We have a 99.9% admission rate with respect of CARICOM nationals,” Hawke told the CCJ.

Hawke added that, “We’ve gone beyond the call of duty. We admit everybody and in Belize, we call it the Jewel. You can come to the Jewel even if you’re gay.”

President of the CCJ, Justice Dennis Byron, announced at the end of the proceedings on Wednesday that the court will need to take some time to deliberate on the proceedings, and it will inform the parties when it intends to hand down its decision in the case of Tomlinson versus Belize and Trinidad and Tobago.