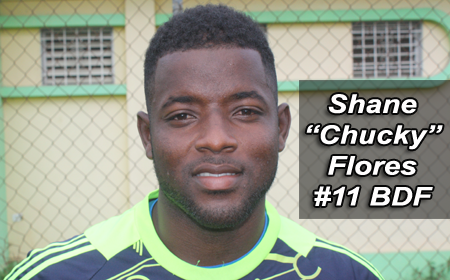 BELIZE CITY–As the Premier League of Belize (PLB) Top 4 playoffs get under way this weekend, football fans in Belmopan will be lucky to see half the games, since two of the playoff teams, Police United and Belmopan Bandits, use the Isidoro Beaton Stadium as their home field.

Fans will also be on the lookout for the goal scoring stars who will see action with their playoff teams. Of course, they will have to wait till next season to see those from teams that failed to make the playoffs.

In the table below, we have listed the names of the top goal scorers in regular season, their team, and the number of games in which they scored. We think the number of goal scoring games is an important statistic, because it shows the level of consistency of a striker. Sometimes it takes 1 goal to win a game, and it is noteworthy when a player can register his name in the scoring column on a regular basis.

The season’s top goal scorer, Harrison “Cafu” Roches of Police United, was quiet for the first five weeks of competition, then exploded with 8 goals in three games, scoring 4 once and 2 twice, 1 being a penalty.

Tied for second with 7 goals was Jarret Davis of Verdes FC (He was tied for top scoring honors in the previous competition), but he scored in 5 different games, scoring 2 twice, and 1 in three different games, including 1 from the penalty spot.

The other 7 goal scorer was Abraham Chavez of Wagiya FC, who also scored in 5 different games. Abraham scored 3 penalties in a single game, and then tallied 1 goal in each of 4 other games.

Belmopan Bandits teammates Elroy “Bibs” Kuylen and Highking Roberts scored 6 goals apiece, but Bibs scored in 4 different games, while Highking scored in 3 games, one of which was a hat trick.

Another player who scored in 5 different games was Luis “Baaka” Torres of Placencia Texmar Assassins, who scored 1 goal in each of 5 games, two coming from the penalty spot.

Goal scorers who tallied at least once in 4 different games were Elroy “Bibs” Kuylen of Belmopan Bandits, Carlton “Fubu” Thomas of BDF, and Wendell Trapp of Wagiya FC.

A total of 31 other players scored 1 goal apiece (not including “own” goals.)