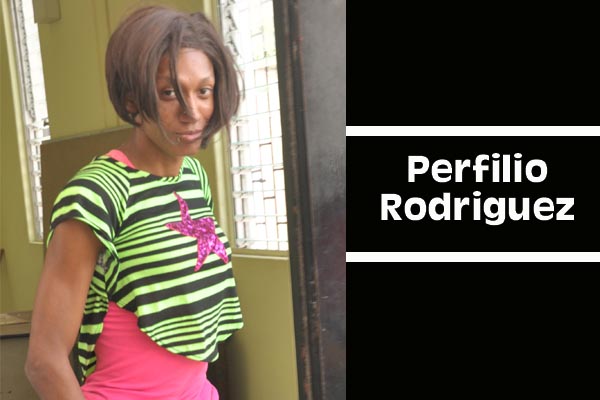 On Tuesday morning at approximately 9:05, the police mobile unit transporting persons from the Queen Street Police Station to the Magistrate’s Court arrived with its cargo of newly charged persons to be arraigned before the courts.

A Belize City transvestite, Perfilio Rodriguez, 19, who prefers to be known as “Vanessa Champaign Paris,” who was recently attacked by a group of men in the streets of Lake Independence, an attack that attracted international media attention when it was reported in the UK Guardian newspaper through Belize’s homosexual rights organization, UNIBAM (which champions the cause of lesbians, gays, bisexuals and transvestites, among others (LGBT)), stepped off the bus dressed in his “drag clothes,” which is to say, in female attire, and was handcuff-escorted by a woman police constable court orderly.

Dressed in a tight pair of jeans with pink tights under a blouse, and a green and black blouse cover-over, and wearing a brown wig rolled down the forehead, stopping at the end of the left ear on one side, Rodriguez sat with legs crossed in the court’s holding area, normally reserved for detained women awaiting arraignment or bail.

Rodriguez occasionally flipped one slipper, nervousness evident on “his” face. He avoided eye contact with some of the curious court workers and outsiders, who strolled inside for a glimpse of him.

At 10:00 a.m. Tuesday, after he was escorted inside the courtroom of Magistrate Herbert Panton, by a male court orderly, Rodriguez’s feminine facade disappeared within the legal reality of identity. As the arraignment proceeded, the Magistrate eventually told the court’s prosecutor that as far as he is concerned, Perfilio Rodriguz, the accused, is a man.

The court prosecutor apologized for the confusion, and a single count of aggravated assault with a knife against Golda Orozco, the sister of the UNIBAM executive director, Caleb Orozco, was read to Rodriguez, who pleaded not guilty to the charge.

According to the court record, the incident occurred on Sunday, June 29, at a house at 5 Zericote Street where Golda Orozco, the virtual complaint, resides.

Rodriguez, a self-employed resident, also of 5 Zericote Street, pleaded not guilty, but kept smiling through the proceedings.

The smiling prompted Magistrate Panton to exclaim, “This is not a laughing matter. My courtroom is not a smiling matter. You could do yu foolishnes out deh, but you are going to respect my courtroom. Otherwise, we could stop discussing bail and I can cite you for contempt of court and lock you down for a month.”

Rodriguez, in a soft, feminine-sounding voice answered, “I was not laughing, sir.”

The court prosecutor, while not objecting to bail for Rodriguez, told Panton that he would like the court to impose conditions on the bail.

Panton asked Rodriguez if he had somewhere else where he could reside until the case is finished.

Rodriguez told the court that he could stay with relatives in Independence, and a bail of $300 plus one surety in the same amount was set.

The condition of the bail is that Rodriguez does not interfere with the virtual complainant, Orozco, or any prosecution witness.

Rodriguez attempted to tell the court that he has a job to do, which involves working with Caleb Orozco.

Panton, however, stopped him, telling him that he is not to make contact with any member of the virtual complainant’s family. He was ordered to stay at least 100 yards from Orozco; otherwise his bail will be revoked.

The Magistrate also told him that after he secured bail, a police officer would be provided to him so that he could remove his personal belongings from the Zericote Street house, where Caleb and his sister, Golda, live, and he is not to return there until the case is finished.

Today, Thursday, Rodriguez was able to secure bail and was released from the Belize Central Prison in Hattieville.

Earl Jones, CEO of the Kolbe-managed prison, told Amandala on Wednesday, that for Rodriguez’s safety, he had been put in a secluded cell, away from the main prison population, until he could access his bail.

His case has been adjourned to August 29.