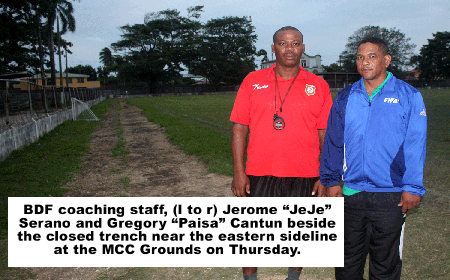 BELIZE CITY, Thurs. Jan. 28, 2016–This evening, around 5:30 p.m., we visited the MCC to see the situation with the reported closing of the trenches near the sidelines (see picture above), and it does appear to us that Sunday’s game between BDF and Belmopan Bandits is more than “tentative.” Except for the official green light by inspecting referee Christopher Reid, which should have taken place today, but may have to be done tomorrow, all indications are that Belize City fans will finally get to see Premier League football action again.. (The last PLB game at the MCC was August 30, 2015, when BDF hosted Placencia Assassins in the PLB Opening Season 2015-2016.)

BDF players were just leaving the field after workout when we arrived, and we caught up with coach, Gregory “Paisa” Cantun and his assistant, Jerome “JeJe” Serano, who confirmed, that their team is ready to play at the MCC on Sunday. Game time is 3:30 p.m., and it will be BDF FC hosting Belmopan Bandits FC.