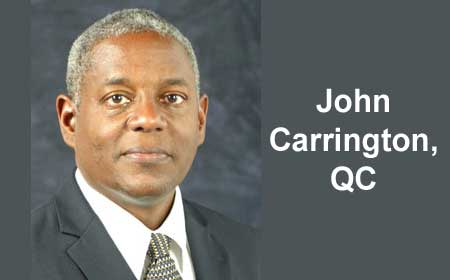 BELIZE CITY, Tues. June 20, 2017–The Government of Belize plans to oppose a hefty legal bill recently submitted by the former shareholders of Belize Telemedia Limited (BTL), which the Michael Ashcroft-related companies are pressing to have deducted from the portion of the arbitration award which falls due on June 28, 2017.

Amandala is reliably informed that the Government of Belize has engaged John Carrington, QC, a Trinidadian lawyer who operates out of Sabals Law Firm in the British Virgin Islands, to lead its case at the Caribbean Court of Justice (CCJ), which it plans to file shortly.

Financial Secretary, Joseph Waight, has told our newspaper that the Government can’t and won’t pay the funds demanded by Dunkeld International Investment and BTL Employees’ Trust – a demand which he said was made without any supporting documentation.

The Government purports that under the September 2015 settlement agreement which Prime Minister Dean Barrow made with Ashcroft, the portion of the arbitration award attributable to the accommodation agreement which the Barrow administration repudiated soon after coming to power in 2008 would be redirected into Belize for projects, with the funds payable in Belize dollars; however, the text of the actual agreement signed has been the subject of varied interpretations.

The CCJ had ruled that the second payment made by the Government of Belize last year was to have all been paid in US dollars, which ended up going entirely to the investors, although the Government contended that a portion should have been payable in Belize dollars for projects in Belize.

With the hefty bill submitted for legal and other expenses amounting to nearly $200 million, almost nothing would be earmarked for projects in Belize, if the payment demand is affirmed.

Denys Barrow, SC, who previously led the Government’s arguments at the CCJ in the matter of the 2016 dispute over payments in settlement of the arbitration award, was recently sworn in as the first Belizean justice of the CCJ, and Carrington, whose expertise is said to be commercial and civil litigation, corporate insolvency, banking and commercial transactions, is being engaged to fill the lacuna that now exists on the Government’s legal defense team.