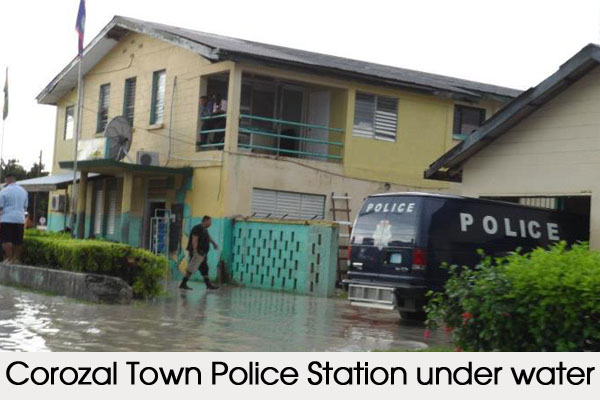 The remnants of a tropical depression that formed last Thursday about 1,800 miles east of the Windward Islands in the Caribbean crossed Belize last night as a tropical wave after dissipating on Saturday while still about 40 miles east of Barbados.

While the system failed to gain enough strength to become a threat as it journeyed through the Caribbean Basin, upon its arrival here it dropped “unexpected and unanticipated” substantial amounts of rainfall in the north and center of the country.

The National Meteorological Service has confirmed that as a result of the wave, some six inches of rain fell in the area of Consejo, Corozal District, as recorded this morning, and two inches in Orange Walk. Belize City also saw some shower activity.

According to Belize’s weather bureau, showers are expected in the North tonight, though not as much as last night, and tomorrow, Friday, will see a decrease in rain activity. Conditions on the weekend will be generally fair with only isolated showers and thunderstorms.

Areas of the Corozal District earlier today were under threat of evacuation due to flooding conditions brought on by the intense rainfall caused by the wave last night and this morning.

In the White Cocal area behind “Skeleton Town,” north of 2nd Street North in Corozal Town, there was a foot of water in the area around 7:00 a.m. Rains had begun around 8:00 last night and continued throughout the night, causing furniture and personal belongings to get soaked, especially in houses built close to the ground. Other parts of Corozal Town affected are the Chula Vista, Baeza and Joseito Layout areas.

In southern villages of the Corozal District such as San Andres, Libertad, Louisville, Santa Clara, San Roman, San Narciso, San Victor, and Concepcion, residents are unable to access their kitchens due to flood conditions.

In Libertad, the Methodist School was opened for shelter because half the village is under water, and the Corozal Community College, Guadalupe R.C. School and Xaibe R.C. School have also been opened as shelters for the affected families.

This afternoon, coordinator of the district branch of NEMO, Willard Levy, told us that after a short break in rains beginning around nine this morning, the showers have started up again and are expected to continue, meaning that a brief reduction in water levels is being reversed. Later reports to us say that the rain has stopped and water levels are slowly going down.

As of this afternoon, there are only seven persons occupying the Guadalupe shelter and NEMO is presently assisting affected residents of the Chula Vista area to move their belongings to the homes of their friends and family elsewhere.