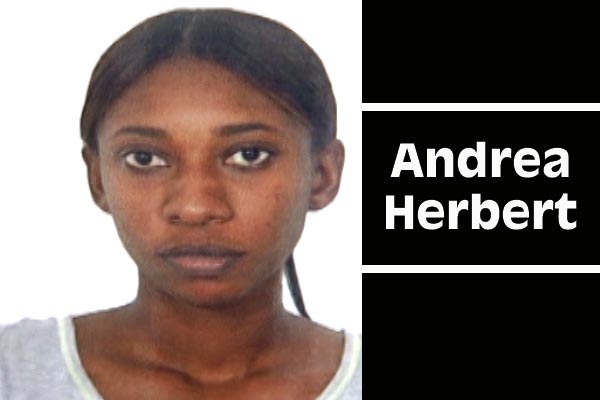 Her body was retrieved from Haulover Creek near Bel China Bridge

The authorities at the Karl Heusner Memorial Hospital (KHMH) today, in a press release, said that they were “saddened” by the death of Andrea Herbert, 22, whose body was recovered from the Haulover Creek near the Bel China Bridge on Youth for the Future Drive at about 9:30 Tuesday morning by police.

Her body was taken to the Karl Heusner Memorial Hospital morgue, where she was declared dead on arrival. Her family suspects that she may have taken her own life.

Herbert’s grieving mother, Agnes Herbert, told Amandala that on Tuesday evening, she took her daughter, who was suffering from depression, to the KHMH for treatment, but Andrea walked out of the hospital, because they had been waiting for too long a time – about three hours – without getting access to a doctor.

Agnes said that when her daughter did not return, she began to look for her and went to the Mahogany Street Police Station to seek assistance in locating her, but was told that they had to wait for 24 hours. The family would search for her after leaving the station, but Andrea was not found that Tuesday night.

Agnes said that on Wednesday morning when she went back to the Mahogany Street Police Station to make an official missing person report, she was told that her daughter had been found dead in the river near Bel China Bridge. She then went to the area and identified her daughter.

Agnes Herbert is very angry, because, she said, if the police had responded at the time she went to them, she believed that her daughter could have been found and taken home, and would have still been alive.

In trying to explain how Herbert was left unattended for three hours, the brief KHMH release said, “Ms. Herbert, along with her mother, came to our Accident and Emergency Department on the night of July 1, 2014 and was triaged in a timely manner.

“The A and E staff were later informed by the patient’s mother that she had left the department while waiting for further attention, at which point we asked her mother to bring her back.”

The KHMH release added that “The KHMH does not have a psychiatric service and normally only manages acute psychiatric emergencies which are then referred to these centers for further care.” The “centers” they are referring to are the Cleopatra White and Port Loyola clinics.

The hospital did not explain why Herbert was not given attention for the better part of three hours on that fateful Tuesday night.

In a media briefing yesterday afternoon, Superintendent Alden Dawson, Commander of Precinct 1 Police, said that the cause of Andrea’s death is still unknown, but no physical signs of violence were noted on the body.

Police said that they are not ruling out suicide, and their investigation continues.

Loverne Welch, Andrea’s aunt, said that Andrea went home Tuesday evening and began to complain that she was not feeling well, and was having difficulty breathing and wanted a nebulizer. Her mother then took her to the hospital, to the Emergency Department, and the nurse wrote up her particulars and they began to wait for the doctor, from about 7:00 that evening.

Up to about 10:00 that night, Andrea still had not been seen by a doctor. During the long wait, she became impatient and began to walk in and out of the unit. Agnes said that when Andrea went out of the emergency unit, she spoke with a Hispanic man. She later went out and did not return.

Andrea’s uncle, Mark Welch, said that his sister-in-law came to their house and reported his niece missing, and they went to the Mahogany Street Police Station and made the report, after which they began a search for her, but it was fruitless. And yesterday morning, she was found dead in the Haulover Creek.

Police, however, are not sure how she ended up in the water.

Agnes Herbert told KREM Radio that her daughter had threatened to take her life on several occasions. Andrea was a graduate of Anglican Cathedral College and had also graduated from the Ministry of Education’s Apprenticeship Program. The company where she had interned did not keep her on as a permanent employee and she had continued looking for a job.

Her mother said she had grown increasingly frustrated that she could not find employment, because she desperately wanted to be able to help out at home financially.

On many occasions, Andrea told them that she wanted to kill herself because she didn’t understand this life, why she had to go through so many challenges, such as wanting a job but not being able to get one, and that it had become too challenging for her. More than once she had talked about drowning herself, and the family feels that if the police had begun looking for Andrea immediately, instead of forcing them to wait “24 hours,” she would not have died.

Andrea was deeply troubled and was treated regularly by a mental health nurse. She had no children and her family says she was not in a relationship. She spent most of her time alone, although she was very close to her younger sister.

Mark Welch said that she was a very quiet person.

Andrea is survived by her mother and father, one brother and one sister, her aunts, her grandparents, uncles, and other relatives and friends.