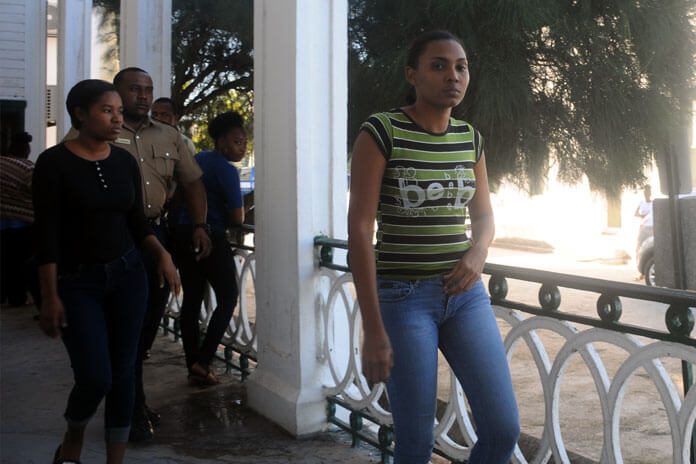 Rivree Dawn Flores, 28 a call center agent of number 2 Dunn Street and Tavor Santos, 18, a student of the same address, both pleaded not guilty to possession of controlled drugs with intent to supply to another for the purpose of drug trafficking.

The two accused women are being represented by attorney Anthony Sylvestre.

In addition to the two counts of drug trafficking, police also reportedly found an empty magazine.

Both women pleaded not guilty to the two charges of possession of controlled drug amounting to 7,325 grams (15 pounds) and 322 grams.

This morning after the two counts of drug trafficking charges were read to the duo, their case was stood down to allow the prosecutor to determine if police would bring a charge for the empty 9mm magazine clip, which police allegedly found at the back of their unfenced yard.

When the hearing resumed this afternoon, court prosecutor Christopher Smith told the court that police may bring back the firearm-related charge for the empty magazine at any time.

With no firearm-related charge, Chief Magistrate Fraser set bail at $5,000 plus one surety in the same amount.

The bail condition is that the two cannot leave the country without the permission of the court.

“Not even to go to Chetumal or Melchor,” Chief Magistrate Fraser told the women.

Court papers indicate that police, acting on intelligence received, conducted a search at number 2 Dunn Street, where the cannabis was found wrapped in 3 transparent black plastic bags in the yard by police dogs.

Flores and Santos are expected to return to court on January 22, 2020.

Drug trafficking carries a mandatory $10,000 fine and or 3 years in prison.