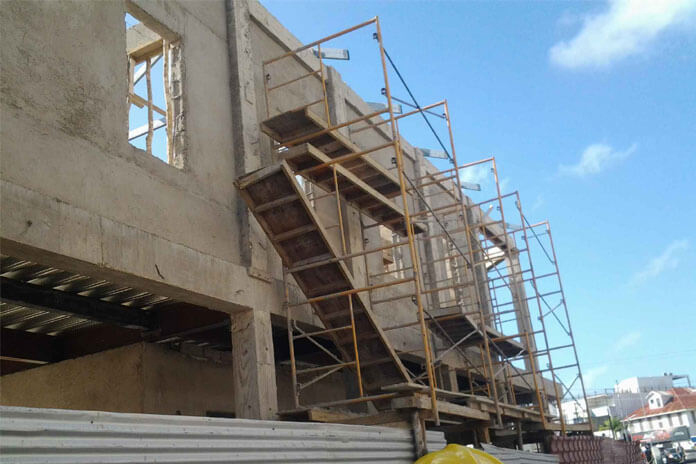 BELIZE CITY, Wed. Feb. 19, 2020– At about 8:30 this morning, two masons working on the outside wall of the new building called the Belize Heritage Plaza, which is being constructed at the corner of Queen and North Front Street, were standing on a platform elevated on a scaffold to a height of about 20 feet above ground and were working on the wall, on the Queen Street side of the building.

It is believed that one of the men was standing at the edge of the platform and missed his footing, and slipped, but grabbed onto his co-worker for support, causing the platform to become dislodged. The two workers then fell off the platform to the ground below.

One of the men was taken to the Karl Heusner Memorial Hospital (KHMH) by ambulance, and the other was taken to the KHMH in a police vehicle. Luckily, the injuries — mainly scratches and bruises— were not life-threatening. The site supervisor said that further tests are being done to ascertain if the men suffered any internal injuries.

On our arrival on the scene, the scaffold platform on which they were standing was still in its dislodged position. The accident is being investigated by several entities, including the Labor Department.

The managers of the Downtown Rejuvenation Project, under which the work that is being done on the Belize Heritage Plaza falls, has advised the contractor to improve security and to conduct preventative measures to prevent such accidents.

Facebook
Twitter
Pinterest
WhatsApp
Print
Previous articleCricket Corner – “Cow know weh paat weak fence deh.”
Next articleThe Mennonites have what most of our tribes want. But do they have too much?