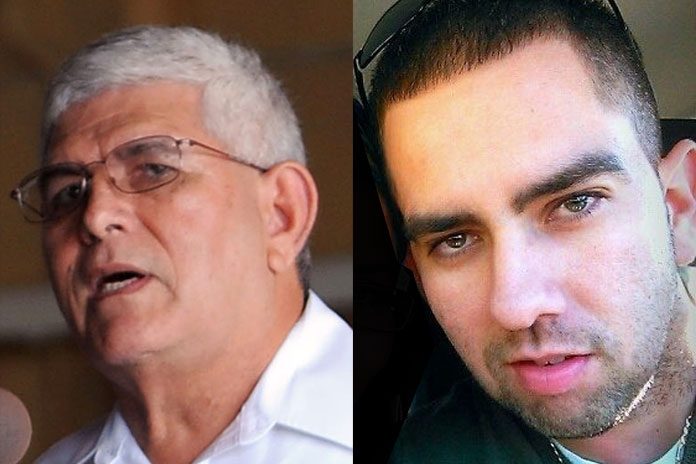 BELIZE CITY, Thurs. Oct. 31, 2019– The United Democratic Party government of Prime Minister Dean Barrow suffered much political damage when in late August, at a sitting of the House of Representatives; the Prime Minister introduced a write-off motion for a student loan given to Joshua Perdomo, a son of his Cabinet Secretary, Carlos Perdomo.

Joshua Perdomo signed a 3-year bond with the Government of Belize to pursue a Master’s Degree in Forensic Genetics and was supposed to return to his job at the Ministry of National Security. Since he never returned, he was terminated in 2011 in that ministry.

The public uproar generated by the write-off caused Cabinet Secretary Carlos Perdomo to issue a statement late this evening via a government press release, which was accompanied by a government receipt for $40,000.

“In reference to a student assistant bond signed on by one of my children, I hereby inform that the bond has been paid in full,” said Perdomo in the first paragraph of his brief press release.

That first paragraph, however, is not accurate, because the bond was signed by two of his children, Joshua Perdomo, and his sister, Sylvia Perdomo. Joshua was the beneficiary of the student assistant bond and his sister signed as the surety.

When he presented the loan motion to the House of Representatives, Barrow had told the House that Joshua Perdomo could not be located.

It was discovered, however, that Perdomo stayed in the US after completing his studies, and although he was gainfully employed in his field of forensics, reportedly in Texas, he never repaid the money to the government, and deprived the people of Belize of the service he had committed to providing when he signed the bond.

Government also did not demonstrate that it had exercised every option to collect the money, because there was no mention of whether the surety, Perdomo’s sister, had been approached in an effort to get her to repay the money in the absence of her brother.

The Perdomo student bond write-off resonated across the country with a firestorm of criticism, and when the motion went to the Senate, it was defeated by a vote of 7 to 6, with only UDP senators voting in support. A government motion had never been defeated in the Senate since the ascendance of the 13th senator.

Despite the defeat suffered in the Senate, the Barrow government was still insisting that the write-off motion was necessary because the loan had reached the statute-barred period. The Opposition People’s United Party (PUP) Caribbean Shores area representative, Hon. Kareem Musa, researched the law and told the House of Representatives that the Attorney General had erred in saying that the bond was statute- barred.

In fact, twelve more years remained before it would have become statute-barred. The PUP had threatened court action against the government over the write-off, he said.

Critics asked why should Joshua Perdomo, a son of someone as prominent as the Cabinet Secretary, walk away with over $40,000 of taxpayers’ money, while so many poor students struggle to find money to pay for their education?

And those are the fortunate ones. Many gifted and ambitious students are unable to even begin tertiary education because they have no access to any money at all.

When the Prime Minister introduced the write-off motion in the House of Representatives, it was not for $40,000. That figure was only used to round off the amount. In reality, the write off motion was for $40,474.88. A receipt for $40,000, therefore, does not cover the entire write-off.

It appears that Joshua Perdomo, based on the tone of his father’s press release, did not repay the money. It apparently was paid by his family, who avoided mentioning the government write-off motion in the press release signed by Carlos Perdomo.

One is left to wonder if the public had not reacted with such contempt and scorn to the Prime Minister’s write-off motion, whether the Perdomo family would have tried to pay the student bond commitment, notwithstanding the government’s assertion that the debt had become statute-barred and the government was legally unable to collect it.