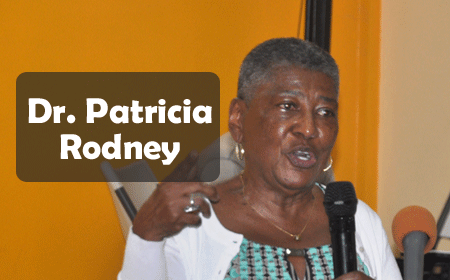 BELIZE CITY, Tues. Aug. 1, 2017–About 75 persons turned up at the Gateway Youth Center this evening for a presentation on the health of Afro-Belizeans by Dr. Patricia Rodney — the key event marking the UBAD Education Foundation’s (UEF) observance of Emancipation Day this year. Emancipation Day, August 1, is celebrated in many Caribbean countries. Participation in activities in Belize in recognition of this historical event has been increasing steadily since the UEF began commemorating the day four years ago.

Dr. Rodney, a retired nurse and sociologist, is the head of the Dr. Walter Rodney Foundation, in Atlanta, Georgia, a foundation dedicated to keeping the legacy of her late husband, Dr. Walter Rodney, alive. Dr. Rodney, a ranking scholar and Guyanese historian, was assassinated with a car bomb by Guyanese security forces in Georgetown, Guyana’s capital city, in June 1980.

Emancipation Day celebrations began in earnest at the Queen Street Baptist Church, where participants engaged in an ecumenical service that was complete with drumming, food and music. This morning the church bell rang out at 12:00 a.m., symbolically announcing that Emancipation Day had arrived.

At 6:00 a.m. this morning, participants observing Emancipation Day gathered in front of the Caribbean Sea in Buttonwood Bay. They set dozens of colorful paper boats into the sea, in tribute to the ancestors of Afro-Belizeans who made the journey across the Atlantic Middle Passage to the so-called New World.

Before beginning her presentation on the health of Afro-Belizeans from Emancipation Day up to the present, Dr. Rodney took time out to thank Ya Ya Marin Coleman, the chairperson of the UEF, for the invitation to speak, and she also paid tribute to her husband, Dr. Walter Rodney, by reading a passage from one of his books, The Groundings With My Brothers, a work first published in 1969, but which was recently reprinted with a new foreword by Mrs. Rodney in which she illuminates his work in a new, intimate and personal light.
Dr. Patricia Rodney, in outlining the subject of her presentation, said it is “directly relevant to people of African descent.” She explained that the post-Emancipation healthcare system focused on general obstacles, district medical officers and dispensaries.

“The emphasis was on curative services that were not geared toward disease prevention…that model did not address the need of the diverse population which included free slaves, indentured laborers, migrants and its indigenous populations in colonial and newly independent nations,” she said.

“In 1978 a gathering of developing nations, funders and international organizations agreed to a comprehensive primary health care model, known as the Alma-Ata declaration with the goal of achieving health for all by the year 2000. This comprehensive model was subsequently aborted for a selected model due to a number of factors, including the proposed cost and investment, pressure to reduce spending by western powers and international agencies, the impact of structural adjustment policies and a lack of political will,” stated Rodney.

She further outlined, “This model was adopted to include female education, family planning, and food supplements, but it still lacked the core element of community participation and increased social and economic equity…what is referred to as the social determinants of health, the conditions in which people are born, live, work and age that affect their health.”

“So, what are the factors of the Belizean people? The Belizean government has made significant changes to the healthcare system and as a result, according to reports, Belize has shown marked improvements in a number of areas. However, some key areas of national concern remain and include the following: the high prevalence of communicable diseases, such as malaria, dengue fever, gastroenteritis and cholera, high mortality rates on non-communicable diseases, such as anemia, malnutrition, growth retardation, diabetes and obesity. Cardiovascular diseases are a significant cause of death not only in the elderly, but also in the productive age populations of 20 to 49 years. An increase in health problems related to human behavior on the light side, such as injury, traffic accidents, violence, domestic violence, gang violence, rape, abortions, STI’s, HIV AIDS and suicide,” Rodney said.

Dr. Rodney explained that in her examination of the literature that addresses the health concerns of the Afro-descendant population she encountered two main difficulties. “One was the paucity of information on the health of Afro-Belizeans,” she said. “It was just not enough data. The second challenge was that the data that I found was not aggregated, so it was difficult to make any hardcore assumptions.”

Among the suggestions that Dr. Rodney cited as a means of improving health in Belize are poverty alleviation, economic equity, health equity and consciousness — embracing our Africa-ness.

On the aspect of health equity, Dr. Rodney stressed that it is important to have more trained local personnel and an improvement in the way data is collected. She also stressed the importance of a reduction in HIV and STI rates, increased awareness of HIV/AIDS, and increased funding and programs for mental health. Dr. Rodney explained that mental health is an area that is neglected throughout the Caribbean. There is a need to enhance community involvement and participation and the transfer of knowledge, practice and research of intra-traditional medicine.

Dr. Rodney said she noticed that there is traditional medicine in Belize, but it is not fully integrated into the system.

Embracing consciousness of our African-ness resonates in the words of Marcus Garvey, Dr. Rodney said, as she noted, “Emancipate ourselves from mental slavery. None but ourselves can free our minds. And also the words of Ngugi Wa Tiango, a Kenyan scholar who writes about de-colonialization of our minds.”
Dr. Rodney said that health is not only about diet and exercise; it includes our consciousness, how we see ourselves.

Dr. Rodney ended her presentation with a quote from her husband’s seminal book, How Europe Underdeveloped Africa, which dealt with an understanding of ourselves, our values, and our culture as a people.

“Certain things were outstanding in the African way of life, whether in a small or large society. These distinctive things in the African way of life, amount to African culture. Among the principles of African culture the following are to be noted: hospitality, respect — especially for elders, the importance of women — especially in cases of inheritance, humane treatment of law breakers, spiritual reflection, common use of the land, constant employment of music — especially our drums, and bright colors. Some of these things are found in many different human societies, but very few are encouraged in the white capitalist world….,” said Rodney.

After quoting from How Europe Underdeveloped Africa, Dr. Rodney ended her presentation by inviting the audience to sing Bob Marley’s Redemption Song. This was followed by a lively question and answer session which kept Dr. Rodney engaged up to the last minute of the scheduled time for using the Gateway Youth Center facility.

The event was broadcast live on KREM Radio.