Saldivar was UDP leader for less than 72 hours 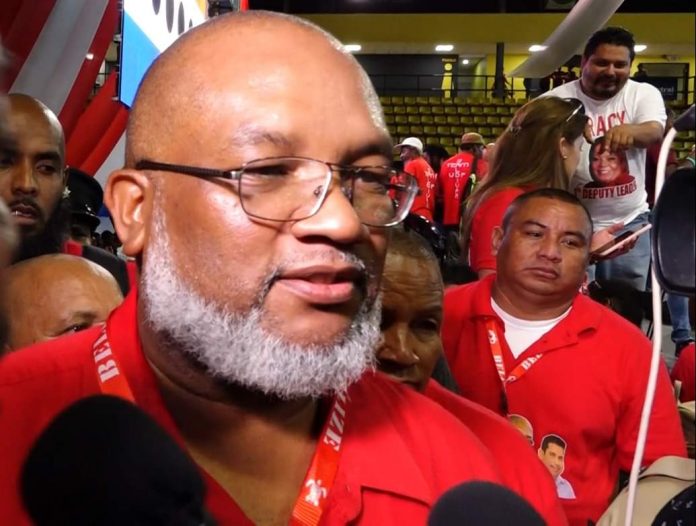 BELIZE CITY, Wed. Feb. 12, 2020– On Sunday, February 9, following the balloting in the United Democratic Party (UDP) national convention, it was announced that Hon. John Saldivar had defeated Hon. Patrick Faber, and he was sworn in as the new UDP leader.

On Wednesday, Saldivar went to an “emergency Cabinet meeting” and complied with Prime Minister Dean Barrow’s request that he resign as UDP Leader-Elect.

A legal opinion to us from the Opposition the People’s United Party, however, is that Saldivar was not the “UDP leader-elect” when he agreed to resign, as has been asserted; rather, he was the new UDP leader who had been duly sworn in.

We were told that if Saldivar had gone to the Supreme Court for a writ of mandamus, the high court would have issued it, notwithstanding the fact that Prime Minister Barrow has not yet gone into retirement, because Saldivar had already taken the oath of his office, constitutionally speaking.

On Monday, the UDP Secretariat invited the media to a press conference at its Youth for the Future Drive headquarters. By Tuesday, however, the party cancelled the press conference.

Word began to filter out of the governing party that some senior ministers had decided that they would not attend the press conference that was to be held by their newly elected leader, Saldivar. Apparently, they did not want to be seen as supporting Saldivar, who was facing serious allegations in a US court in connection with the US$1 billion- plus fraud case against Americans Lev Dermen and Jacob Kingston.

By Tuesday, the party was announcing that it had postponed its press conference. The constitutional showdown between Barrow and Saldivar was on, because of the Washakie fraud and money laundering trial of Lev Dermen in a US federal district court in Salt Lake City, Utah.

On Monday and Tuesday, Jacob Kingston, a co-defendant who pleaded guilty to a number of charges in the Washakie Renewable Energy fraud case, and is cooperating with prosecutors, gave damning evidence which implicated Minister of National Security, John Saldivar.

In his last two days on the witness stand, Kingston testified that he had witnessed Dermen giving Saldivar “stacks of cash” in US $10,000 bundles when the two men visited Belize in pursuit of business opportunities.

Kingston testified on Monday that he did not know why Dermen had given the money to Saldivar.

On Tuesday, Kingston’s testimony was much more damning to Saldivar, because Kingston provided text messages that were shown to the jury which was hearing the evidence in the case.

Saldivar traveled to Miami and allegedly picked up US$50,000 from a business associate of Dermen.

Those revelations in court prompted Prime Minister Barrow to call an emergency Cabinet meeting, which was first scheduled to be held in Belize City, then was moved to Belmopan, and by the time the meeting got underway sometime after 10:00 a.m. on Wednesday, it turned into a full-fledged meeting with all 31 UDP standard bearers.

Members of the media attempted to get comments from some of the UDP leaders as they passed them on their way to the meeting, but in vain.

Shortly after 12:00 p.m., the meeting was over. All the Cabinet members who came out of the meeting gave one answer when questioned about what had transpired during the meeting: “The Prime Minister will make a statement.”

The allegations in the Dermen case contained assertions that Belizean officials were paid by Dermen and his associates in connection with Dermen’s efforts to obtain Belizean nationality, a Belizean diplomatic passport and ambassadorial or consular status.

The testimony given in the trial this Monday and Tuesday by Jacob Kingston has proved to, to say the least, explosive. Kingston incriminated Minister John Saldivar, in particular and produced text messages in support of the allegations he made against Minister Saldivar.

Prime Minister Barrow had earlier told the media that his Ministers “had sworn” to cabinet tat none of them had taken any money from Dermen and his associates.

“I said in cabinet at the time, and later at a press conference, said PM Barrow, “that any Minister subsequently proven indeed to have taken money, and therefore to have lied to cabinet, would have to leave the cabinet.”

“That time for leaving, in view of what happened Monday and Tuesday in Salt Lake City, Utah, has unfortunately come. I, therefore, today asked Minister Saldivar to submit to me his resignation as Leader Elect of the United Democratic Party. He has agreed to do s,” said Barrow.
In addition to the resignation, I have decided to put the Minister on indefinite suspension from the cabinet. This will do two things: It will give the Minister a chance to prove the innocence which he strongly maintains; it will also give time for the Government to obtain official transcripts from the trial and direct the police to launch and complete a thorough investigation into all the allegations made in the court of that Dermen trial,” Barrow said.

“The UDP will in due time choose a new leader,” PM Barrow said at the end of his statement.

Saldivar, too, issued a press statement.

Saldivar, too, issued a press statement.

“In a Special Cabinet meeting today, I informed the Prime Minister and colleagues of my decision to resign as the Leader-Elect of the United Democratic Party. I have come to this decision after careful consideration and consultation with colleagues. While I maintain my innocence of any wrongdoing, bribery, or corruption and the testimony in Utah has confirmed that there was no bribery, I feel that the negative attention being generated by this trial is overtaking my Party and can hurt our chances in the upcoming general elections.

“I have therefore stepped aside to allow a new leader to be chosen … once my name is properly cleared I will resume the work that I love so dearly. I will continue to work with colleagues to ensure victory for our UDP later this year. I will also be happy to continue serving as Minister of National Security once this matter is settled,” said the release.