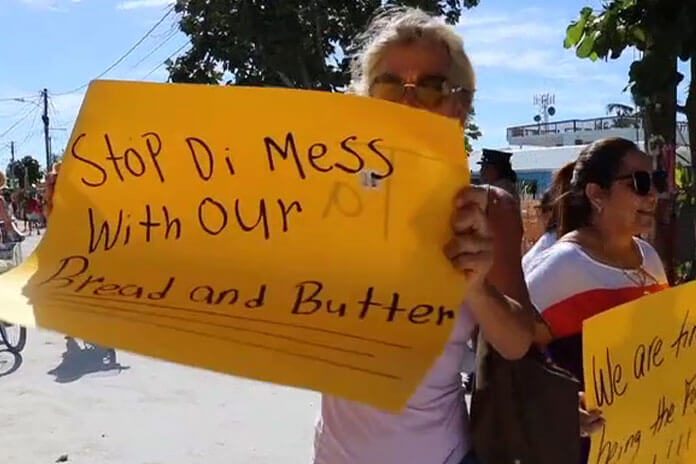 BELIZE CITY, Thurs. Jan. 2, 2020– The eyes of the nation have been focused on Caye Caulker for several days now, since the failure of Belize Water Services Limited’s (BWSL) reverse osmosis system led to mass inconvenience on Belize’s “Destination of the Year.” Then, to make matters worse, the island was plunged into powerlessness and darkness when the generators of the Belize Electricity Limited (BEL) experienced mechanical failure after more than two decades of use.

Caye Caulker has been without water for the last 5 days. 3,720 (5-Gallon) bottles and 7,680 (1.75 Litre PET) bottles were donated to the island by Bowen and Bowen two days ago, and in addition to that, two water trucks were taken to the island to distribute water to hotels. BWSL, in their press release last week, explained that it has ordered a shaft from overseas to replace the one that was broken on its reverse osmosis water treatment plant. It could take several days before the shaft arrives in the country.

The failure of these two key utility companies could not have come at a worse time – at the start of the tourism high season, just a few days after the start of the North American winter when travelers are seeking escape from the cold.

BWS’ and BEL’s failure on Caye Caulker is nothing short of a crisis that is having enormous economic impact on the tourism industry, as droves of tourists have been abandoning their waterless, and powerless hotels.

A protest was scheduled to take place today, but information to Amandala is that the proper permits were not obtained by its organizers. The stakeholders settled for a press conference, and afterwards some took to the streets with their placards.

Earlier today, Thursday, BEL issued a press release trumpeting that it had restored power on the island around 2:34 a.m. The company said that it had completed repairs on one of the generation units that supplies electricity to the island. 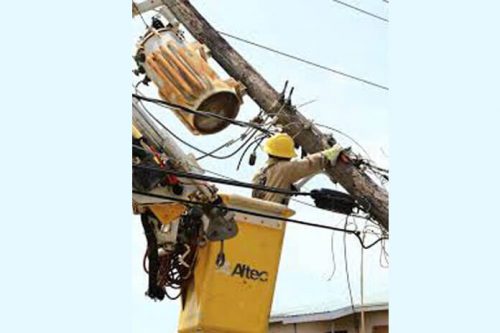 The company went on to state that, “Power supply will be maintained to the capacity of the two functioning generation units, while our teams work ceaselessly to complete repairs to a third generation unit.”

Before the day was over, however, BEL sent off another press release; this one sounded a grim warning: “The Company reminds customers to practice energy conservation, in particular curtailing the use of air conditioners, to ensure that power supply can be maintained for all customers on the island particularly during the peak hours.”

So, while BEL’s two press releases today appeared to be damage control and the salvaging of the company’s corporate reputation, the Belize Tourism Industry Association (BTIA) issued its own press release which did not pull any punches, but was “an urgent appeal” to government “to rectify” what the BTIA described as “negligence of legally mandated suppliers of electricity and water on the island of Caye Caulker.” 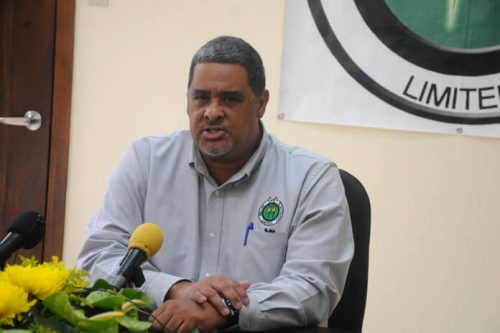 The BTIA release went on to say that potable water is a basic necessity for Belizeans and for the productivity of the economy.

“Belizeans and their livelihood deserve this basic resource and a reliable electrical supply. The patience of the Caye Caulker community is now at an end as the problem with these utilities is a chronic problem which has been worsening over this past year,” the BTIA release said.

The release added, “The island has been left without water and electricity on an ongoing basis and, especially, at peak times of 2018 and 2019 including Christmases, Easters and Lobsterfests. The time is now for long-term solutions as the negative experience of Caye Caulker has detrimental ramifications for the entire country of Belize, the national tourism industry and the livelihood of Hicaqueños.”

The Opposition, People’s United Party (PUP) also weighed in on the Caye Caulker crisis with its own press release today, expressing its “grave concern over the complete breakdown of electrical and water services on Caye Caulker.”

“The PUP joins the Caye Caulker Business Association and the Belize Tourism Industry Association in calling on the Government of Belize (GOB) to urgently find a solution to this disaster. It is unacceptable that Caye Caulker is without water and electricity for 5 days with electricity being fully restored only this morning at 2 o’clock — the most basic needs for a decent quality of life for the thousands living on the island,” said the PUP release.

The release adds, “In addition to this being unsafe and unhealthy, businesses and tourism establishments are suffering significant losses as visitors are cancelling their vacation plans to the island due to lack of those essential services. This is the high season for the tourism industry and this has become a chronic situation for the livelihood of Caye Caulker residents.”

The PUP release said this is a disaster for the tourism destination which in November was awarded the title of Destination of the Year by the BTB.

In criticizing area representative and Minister of Tourism, Hon. Manuel Heredia, the PUP said he was at a loss for words and has no clue and is clearly not focused on solving this serious problem.

The PUP accused the government of trafficking in scandalous road contracts instead of putting priority on the quality of life of Belizeans. 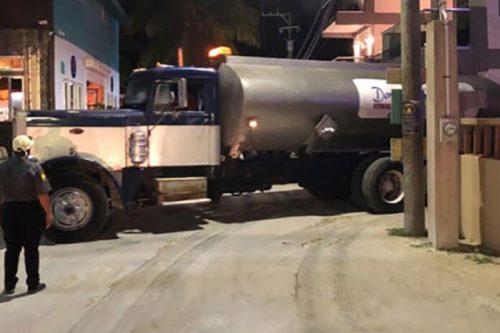 One of two water trucks supplying water to Caye Caulker

The release ends saying, “The PUP also urges that an inquiry by the PUC be done in earnest to determine the root cause of this crisis and what mitigating plans the utility companies will put in place to ensure there is no reoccurrence in the future. It is a New Year and Belizeans demand better!”

Presently BEL has three generators operating on Caye Caulker, but at the press conference today, the company explained that if customers use maximum amounts of electricity by turning on all appliances, this will force BEL to shed load, meaning that power outages will become necessary.

“We could have done a better job of maintaining these equipment; we will not run away from our responsibilities,” said BEL General Manager for Commercial and Retail Services, Sean Fuller.

Fuller also outlined BEL’s plan to alleviate its mechanical problems with its generation of electricity on Cay Caulker. Apart from bringing in another generator, a 1 megawatt plant from the mainland, and repairing a fourth unit that is on the island, in the medium term they will install a 1.5 megawatt unit that could suffice if one or two of the units goes down. BEL says that within one month’s time they will have the new 1.5 megawatt generator in operation.