Vega’s nephew gets another sugar plum 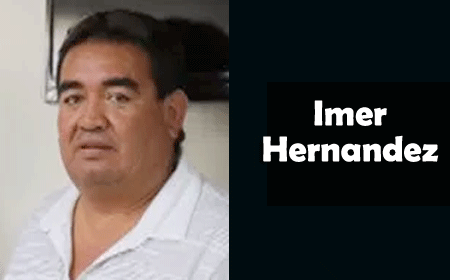 BELMOPAN, Cayo District, Mon. Oct. 23, 2017–During Friday’s sitting of the House of Representatives, Leader of the Opposition, John Briceño, called out the UDP-led government for awarding a crony an estimated 8-million-dollar contract to reconstruct just one mile of Fabers Road in Belize City.

Barrow denied that the award was merely a move to fill his party’s coffers with campaign finances months away from municipal elections. He went on to deny any knowledge of Hernandez’ political allegiance and further claimed that he was one of the best contractors.

Briceño opened his address, “Madam Speaker, I rise to speak on a matter of national importance, something that is on the mind of all Belizeans for these infamous infrastructure projects that the UDP government has been issuing left, right and center through the Ministry of Works, through the Belize Airport Authority and Belize Infrastructure Limited, to name a few.

“Obviously it is election time, so they have all of these big projects being given out to these UDP contractors. I find it incredible that no other than the Prime Minister himself, the famous crusader against corruption, would hold a press conference to defend his government in these contracts that most Belizeans believe are a rip-off.

Briceño claimed that Hernandez has now been getting millions and millions of dollars’ worth of contracts only because of his relationship with Gaspar Vega. Briceño then showed pictures of previous infrastructural projects awarded to Hernandez.

Briceño claimed that it was the Ministry of Works that had to fix the mistakes made by Hernandez. “It is not Imer Hernandez going back and using his own money to fix the road, it is the Ministry of Works,” he said.
According to Briceño, while Barrow was busy defending the estimated 8-million-dollar award to Imer Hernandez, he did not tell the country that Hernandez had been awarded other lucrative contracts.

Prime Minister Barrow responded that the claims Briceño made were not true. He said, “You are talking about the Caye Caulker Airstrip. Imer Hernandez built the Barry Bowen Airstrip, and indeed, that was done by way of an SSB loan. I do understand that there is an application on the part of the Belize Airport Authority in front of the Social Security Board. It’s not for 7 million dollars. It’s for 4 million dollars, and that has not yet been decided on. So you’re absolutely wrong, Sir, and you should correct the record.”

“Well, then you need to correct your Minister of Tourism, because that is what he said on television. I am just repeating what he said,” Briceño countered.

“Now, interestingly, who is Leticia Vega married to? She is married to Omir Vega, who is the engineer, and I am told a shareholder, in Imer Hernandez’s Development Limited. Who is Omir Vega? Omir Vega is the nephew of the former Deputy Prime Minister, the honorable member from Orange Walk North, and to add salt to the wound, we found out that it was the same Imer Hernandez’s development company who got the contract to upgrade the Sir Barry Bowen Municipal Airstrip. Did Leticia Vega recuse herself when that decision was being made? We don’t know. I am asking the question.”

In answer to that, the Prime Minister said to Briceño, “You are wrong, and I believe dishonest, to suggest that Leticia Vega has anything to do with Social Security Board decisions on loan applications. She is the secretary to the board. She is not a voting member of the board, so she plays no role in any decision. Why are you maligning the lady?”

Briceño responded, “It is the same names here, over and over, that are getting these clown contractors. It has become an incessant relationship. Even Rolly Montero, he is a contractor getting contracts from Belize Investment Limited. Who is Rolly Montero? He is the brother of the Minister of Works, who is the co-chair of Belize Infrastructure Limited.”

“Imer Hernandez, the Arguelles brothers, the Berges brothers, and Rolly Montero, they are the ones getting all the government contracts”, Briceño noted.