BELIZE CITY, Thurs. Feb. 16, 2017–Verdes FC clinched a back match against Freedom Fighters FC last night at the Victor Galvez Union Field in Punta Gorda, and thus jumped to first place in the standings at Week 3 of the Premier League of Belize (PLB) Closing Season 2016-2017. Verdes got the 1-nil win on a goal by recently acquired (from Police United) striker, John King, at the 64th minute. The other Week 2 back match, between Wagiya and FC Belize, is tentatively scheduled for tonight at the Carl Ramos Stadium. 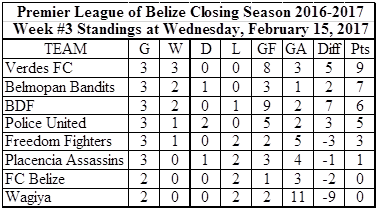 In Week 3 scores for games this past weekend, it was Belmopan Bandits, 2-1, over BDF at the Isidoro Beaton; Freedom Fighters, 2-1, over FC Belize at the MCC; Verdes, 5-2, over Wagiya at the Norman Broaster; and Placencia Assassins and Police United, 2-2, at the Independence Stadium.