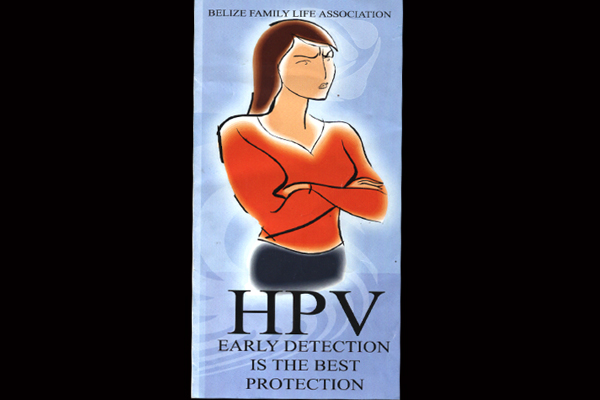 The brochure featured 6 images of cauliflower-looking, genital warts on the tip of the penis, as well as warts at the vagina and anus, in color

A “very graphic” STD brochure, which features close-up shots of grossly infected female and male genitals, fell into the wrong hands on Friday morning – oddly, at a Drug Awareness Fair held by a Northside primary school in Belize City.

The principal of the school, who described the material as “very graphic,” confirmed to our newspaper that the incident did occur, but went further to say that the matter was immediately arrested when the school’s management learned children were collecting the brochures with the gross sexual images.

Six images, which appear in the inside fold of the brochure, feature cauliflower-looking, genital warts on the tip of the penis, as well as warts at the vagina and anus. (All these are body parts, we note, shown in the brochure in color.)

While the event was being held for Drug Awareness Week, one of the invited institutions took brochures produced by the Belize Family Life Association (BFLA), which were supposedly being handed out to high school students who attended the fair.

However, some disinterested students threw the brochures on the ground, the principal told us. That was apparently when younger students started collecting them – some of them even making fun of the photos and competing to see who could collect the most brochures.

According to the principal, some of the students claimed that they got the brochures from the high school students.

The brochures featured the HPV, which stands for human papilloma virus – the virus which is also linked to cervical cancer in women. Of note is that there is also a lobby afoot to promote the vaccination of young people against HPV.

The brochure notes, though, that “Most people infected with HPV do not know they are infected, because the virus itself does not cause symptoms.”

We understand the school authorities bartered with the students, urging them to hand over the sexually explicit brochures in exchange for stickers, telling them that the materials were really for people who are more grown up. The students reportedly complied.

Amandala contacted the Ministry of Education to ask what guidelines they have in place to prevent the occurrence of such incidents. We were advised that whereas there is the Health and Family Life Education (HFLE) Curriculum in operation, schools should exercise better controls and vet what will be presented beforehand, to ensure that the materials are suitable for their students.

It also lists the use of a condom or dental dam as another preventive measure.

The brochure lists 5 risk factors for getting HPV warts – the fifth on the list being having sex at a young age.