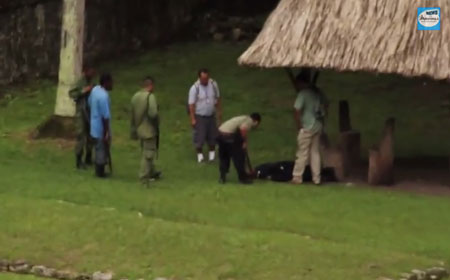 BELIZE CITY–On Monday, September 29, expats who were at the Caracol Archaeological Reserve last Thursday uploaded video imagery of events which unfolded after Tourism Police special constable Danny Conorquie was executed, allegedly by illegal Guatemalan loggers, who are believed to have killed the security officer in retaliation for a sweep earlier in the week which led to the confiscation of five horses.

The video, which went viral on social media on Tuesday, September 30, began with the sound of gunshots, but did not capture the actual shooting of Conorquie.

“They shot a person?” one tourist asked. 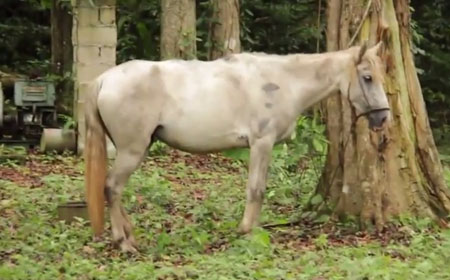 Next, the video showed tourists and tour guides hiding behind a broken wall at the Maya ruin, watching in the distance a group of security officers reacting to Conorquie’s killing.
It showed that after the murder, a team of men hid his body with logs.

A Belizean guide then began explaining Belize’s border troubles, to the tourists. He said that there is a buyer over the border that buys the timber and xáte that are illegally harvested from the Chiquibul Forest.

The guide surmised that the illegal loggers killed Danny as an act of retaliation, and not to retrieve their horses. After killing the special constable, the shooter stole the officer’s gun.
The tourists say that they were escorted out of the Caracol area within a few hours.

Here is the full video:

Amandala thanks Sarah and Erdem, Austrian and Turkish expats who shot the video and shared it on their Vimeo channel: Nonurbia.

They explain that, “On September 25, 2014, a policeman was shot dead in the archeological site of Caracol in Belize near the Guatemalan border. This is what we recorded moments after the incident.”