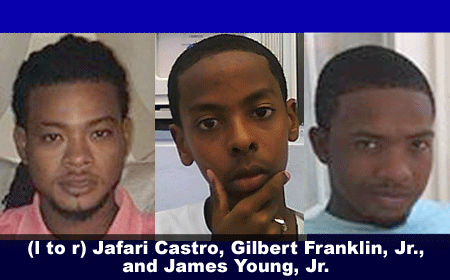 SAN PEDRO, Ambergris Caye, Mon. Aug. 14, 2017–On Saturday afternoon, police confirmed that warrants had been issued for the arrests of men believed to have been involved in the severe beating of Galen University student, Kevin Brown.

The men — Jafari Castro, Gilbert Franklin, Jr., and James Young, Jr. — are all wanted for harm. Franklin is additionally wanted for aggravated assault.

Jafari Castro is a son of Minister of NEMO and Transport, Hon. Edmond “Clear the Land” Castro, whose constituency is Belize Rural North.

At press time tonight, however, police say that the men have not been found.

Last Saturday, Brown had gone to San Pedro to enjoy the Costa Maya festivities when an argument ensued over a bracelet.

As a result, Brown was beaten to the ground “by a gang of people” and struck in the head with a fire extinguisher. He was in a critical, unconscious condition when he was transported to the San Pedro Polyclinic and later the Karl Heusner Memorial Hospital (KHMH).

However, police press officer, Raphael Martinez, later recanted that statement and claimed that the Castro brothers were not being sought. He further stated that the matter was never reported to police and so no investigation had been initiated.

Now, however, police, in yet another twist, say that one of the Castro brothers, Jafari, is being sought.

Coincidentally, Inspector Fitzroy Yearwood was removed from his post in the press office less than 24 hours after his announcement on the Castro brothers. However, he indicated that his transfer had been long requested.

Assistant Commissioner of Police (ACP) Edward Broaster, who is the commander of police operations, told the media that he effected the transfer because he was not satisfied with Yearwood’s work ethic.