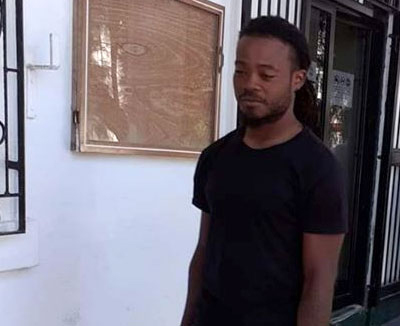 BELIZE CITY, Mon. Nov. 18, 2019– Wasani Castro, 26, a son of NEMO and Transport Minister Edmond Castro, who has had previous brushes with the law, is once more before the court. He is presently facing charges for assault of a police officer. Castro had previously been in the media spotlight for allegedly assaulting police officers twice in the past, but no charges were brought against him.

This time, Castro was accused of assaulting a senior woman police officer, who decided to press charges against him.

Castro appeared in the #1 Court of Chief Magistrate Sharon Fraser, who arraigned him on charges of assaulting a police officer, using indecent words and resisting lawful arrest.

Castro, who is being represented by attorney Orson Elrington, pleaded not guilty to the charges and was offered bail of $600 plus one surety in the same amount.

The incident for which Castro was charged occurred on Saturday, November 16, on Caesar Ridge Road.

Assistant Police Superintendent, Irma Anderson was on duty on Caesar Ridge Road when police saw a white SUV, which Castro was driving.

When Castro exited the vehicle, he allegedly told the police, “Uno no know who me. Uno can’t do me nothing. Dis dah ‘effing’ public street; I park weh I ‘effing’ want.”

Castro was informed that he had committed an offense and was under arrest. Police ordered him to get into a police vehicle, but he allegedly refused and continued cursing the officers.

When the officers tried to detain Castro, a struggle ensued and a Mobile Interdiction Team had to intervene before Castro was arrested and taken to the Raccoon Street Police Precinct, where he was charged with the three criminal offences.