A release from Waterloo Investment Holdings states that the company considers the DOE decision to reject its proposal to be legally unsound and flawed. 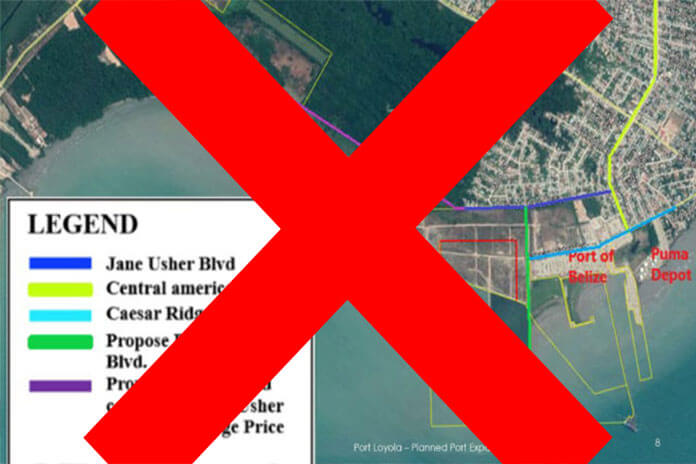 BELIZE CITY, Wed. Jan. 5, 2022– Today, Waterloo Investment Holdings Limited released a statement informing the public that it has formally lodged an appeal against the Department of the Environment (DOE)’s decision to reject its proposal for the construction of a cruise terminal on the property on which the Port of Belize Limited is located. The Ashcroft company proposing the creation of a mega-cruise port and the expansion of a cargo bulking facility at that site received word mid-December 2021 that the National Environmental Appraisal Committee (NEAC) had decided to recommend the rejection of their project. Subsequent to the rejection of their proposed project, company representatives made the claim that the denial of approval for their project was an act of retaliation by some members of the NEAC who had requested bribes from them in return for their assistance in the process. The Minister of Sustainable Development, Climate Change and Disaster Risk Management, Hon. Orlando Habet, and the CEO in the ministry, Dr. Kenrick Williams, who is currently acting as the NEAC chairman, responded by asking the company to be specific — to indicate which members of the 16-member committee had requested bribes and to indicate when and how such requests were made, but no such information has been forthcoming from Waterloo.

Nonetheless, the release from the company states, “Waterloo remains convinced that the reasons provided by the DOE for denying environmental clearance of its proposed project at Port Loyola are flawed, legally unsound, and unable to withstand judicial scrutiny.”

In its last correspondence, the company had indicated that it would initiate legal proceedings by way of judicial review to challenge the decision handed down by the DOE. This appeal is likely to exhaust any possible remedy the company may have before it proceeds to engage in a legal battle. According to the company, the appeal sets out grounds challenging the decision handed down by the DOE. None of those grounds were mentioned within the release from Waterloo.

The company did state, however, that it looks forward to presenting its cases “at an early and fair hearing” to be scheduled by the Minister. The appeal is currently on the desk of the Minister of Sustainable Development, Climate Change, and Disaster Risk Management, Hon. Orlando Habet.

In the company’s release, Steward Howard, CEO of Waterloo, states, “Our commitment to this project is manifest from the BZ$10 million already invested in preparatory studies and unprecedented, scientific analysis. To have denied environmental clearance to this project on the basis of spurious allegations of incomplete information rather than requiring any perceived deficiencies to be addressed is unreasonable and against elementary principles of fairness.”

While all the grounds for the NEAC’s rejection of Waterloo’s proposals were never released to the public, the DOE did mention that the information submitted by the company was incomplete. During public consultations preceding the NEAC’s decision, however, several environmental groups had raised alarm about the impact that the dumping of millions of metric tons of dredged material from the project would have on Belize’s marine environment. After submitting an addendum to its proposal, in which the company suggested a near and onshore solution, the country’s national water and sewerage company, BWS, wrote a letter to the Department of Environment to express concerns.

A previous issue of the Amandala had reported that “Belize Water Services Ltd., in response to the proposed dredging and disposal methods that were presented in the company’s updated EIA addendum (in which the initial plan to dump millions of cubic meters of dredged waste material between English Caye and the Turneffe Atoll was scrapped and the company proposed instead to dump those waste products on nearshore and onshore designated areas), stepped forward to express its concerns and to make GoB and the public aware that if the project were to be given the green light, the dredged waste material would be dumped between its sewer ponds and on top of an important mangrove wetland used for wastewater treatment.”

These sewers receive approximately 1.6 million gallons of wastewater for treatment each day, which is discharged through canals into the Caribbean Sea.

“BWS is greatly concerned by the developer’s proposal to dredge and to place 7.5 million cubic meters of dredged material between the location of BWS’s sewer ponds and the Caribbean Sea,” the letter had stated.