September – remember — is a serious month for hurricanes 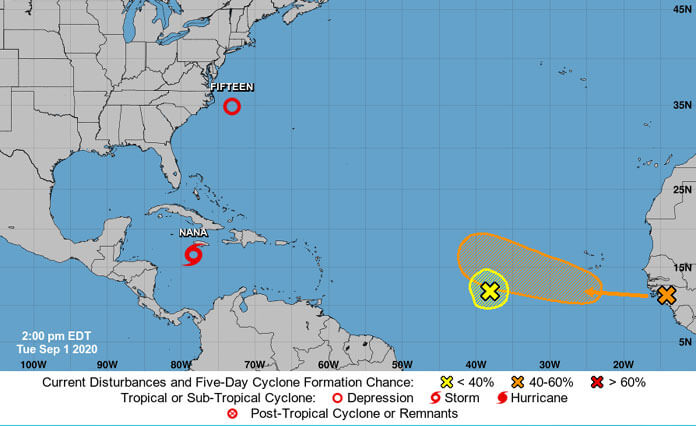 BELIZE CITY, Mon. Aug. 31, 2020– September is celebrations month in Belize, with September 10th being the day on which we honor the memory of the Battle of St. George’s Caye and September 21st being the day that marks the birth of our country; but September is also the month in which we are most likely to be hit by hurricanes. September is the most active period for the formation of hurricanes in the Atlantic, and this fact is noted in the old ditty: June—too soon, July—stand by, August—get set (or, look out you must), September—remember, October—all over.

Today, Tuesday, is the 1st of September, and after being spared less than two weeks ago when a storm named Marco headed north of us, we are looking apprehensively at another weather system. On August 31, Belize’s National Meteorological Service reported, “A broad area of low pressure associated with a tropical wave over the central Caribbean has a high chance of developing into a tropical depression during the next couple of days. This system is moving westward and will continue to be monitored by the National Meteorological Service of Belize.”

Reports from the Weather Channel in the US were that the “system is moving quickly westward through the Caribbean and is producing numerous showers and thunderstorms” and that “conditions are forecast to be conducive for this system to gradually organize, and a tropical depression could develop in the next couple of days.”

According to the Weather Channel, the US National Hurricane Center reported that, regardless of development, the “system will track toward Central America and Yucatan in the week ahead”, and that “areas from Jamaica to Honduras, Belize, Guatemala and the Yucatan should monitor the progress of this disturbance.”

On Sunday evening, at 5:00 p.m., NEMO issued Advisory # 1 for the system. In that advisory, NEMO said the system is moving westward at about 15 mph and that it could start affecting Belize on Thursday, and it advised the public to “remain vigilant and to be prepared for possible storm arrival in accordance with your emergency plan.” NEMO said the public should be prepared to relocate or evacuate, and that they should move early, know which shelter they will go to, and take along essentials for survival.

On Monday, August 31, winds associated with the system were gusting up to 35 knots, and it was in the region of 14.5 degrees North Latitude and 70 degrees West Longitude, which puts it 240 nautical miles south of the Dominican Republic, and about 1100 nautical miles east of Belize.