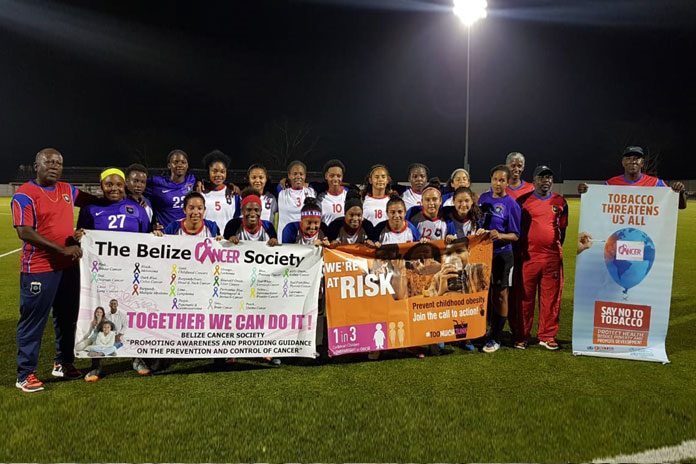 BELIZE CITY, Wed. Nov. 27, 2019– Due to the timing of football competitions across the country, the situation this coming weekend is full of high drama, as a number of games will be “do or die” in either knockout or decisive games 2 of playoff semifinals; and there will also be a big international female friendly return match.

Future FC Little League semifinals
Here in Belize City, the Future Football Club’s Little League U-10 & U-13 Tournaments will feature knockout semifinals in both categories on Saturday at the ITVET (Old Technical) Football Field, where some promising young stars will strut their stuff.

Next week, the losers play for 3rd place, and the winners clash for the championships.

Then on Sunday at the historic MCC Garden, it will be knockout quarterfinal action in the CYDP Peace Cup (BDFA 1st Division 2019-2020 Opening) Tournament. The quarterfinal playoffs will match the top 4 seeded teams from Group A against those from Group B.

PLB semifinals Games 2
Meanwhile, the Premier League of Belize (PLB) 2019-2020 Opening Tournament will be featuring the decisive Games 2 of the semifinals, where Games 1 this past weekend were very close – a 1-1 draw in Mango Creek between Verdes FC and Altitude FC, and a 2-1 win for Bandits Sport over defending champions San Pedro Pirates FC at Ambergris Stadium. On Saturday night, it will be Bandits vs Pirates at the Isidoro Beaton; and on Sunday at the Norman Broaster, Verdes hosts Altitude. The series losers go home, and the winners advance to the finals.

Reports out of the San Pedro camp are that former lead striker, Argentinian Facundo Garnier is no longer with the club, due to “discipline problems.” He did not appear in the Pirates lineup in their semifinal game 1 at Ambergris Stadium, which they lost, 2-1, to Bandits Sport last Saturday night; and he will not be with them this coming Saturday night. But San Pedro coach, Jorge Nunez is unfazed: “No matter, we are ready; we will win on Saturday,” he said this afternoon.

Meanwhile, Verdes FC, who were held to a 1-1 draw by Altitude FC in Mango Creek on Saturday night, will have the services of their and the league’s top striker, Mexican Mariano Landero for game 2 on Sunday afternoon.

NOTE: PLB Manager Wilhelm Miguel confirmed today that, in case of an aggregate tie at the end of regulation in Game 2 of the semifinals, the “away-goal rule” will be in effect. The “away-goal rule” does not apply in the championship final.

International Friendly preempts NAWL semifinals
The drama should have continued with women football semifinals this weekend, where Games 1 of the National Amateur Women’s League (NAWL) 2019-2020 Tournament were played this past weekend, with Rumberas clipping Verdes Rebels, 3-2, on Saturday night in Mango Creek; and defending champs Jewel Fury drawing 1-1 with Gladiators at People’s Stadium on Sunday afternoon. However, the decisive Games 2 in the NAWL semifinals have been postponed till next week, to make room for a scheduled “International Friendly” this weekend between Belize National Women “A” Team and the Guatemalan National Women “A” Team. In their previous meeting in Guatemala, the Belize women were routed, 9-1, Kaite Jones netting our only goal, as half of our National Women Team players were unavailable due to a Jewel Fury club trip to Honduras. With the postponement of the NAWL semifinals, all our Belize women players should be available, and will be looking to change the story line this time around. Le’s go, Belize!!

FFB Communications Director, Ms. Yashmin Juan informed today that the Belize vs Guatemala “international friendly” will be at 4:00 p.m. at FFB Stadium, in order not to clash with the PLB semifinal at 8:00 p.m. at the Isidoro Beaton.

The current National Women “A” Team is not the same as in the picture above, taken in March of 2019 when the FFB hosted a Motlow State College team. For the current Women “A” Team players list, see the press release, “FFB calls National ‘A’ Female players to camp for International Friendly,” elsewhere in this issue.