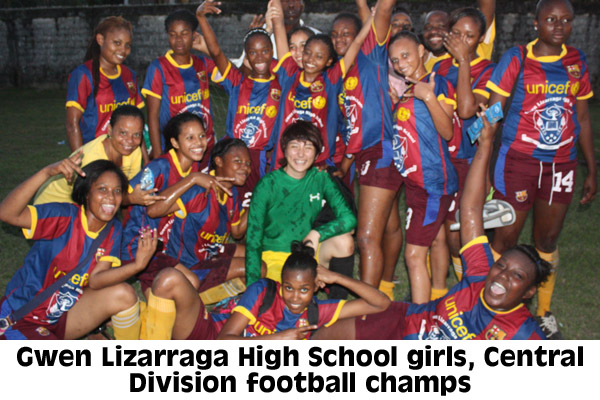 The National Secondary Schools Sports Association’s (NSSSA) Central Division football tournament climaxed this evening at the MCC Garden in Belize City where the two final games of the season were played with intensity as the finalists in the female and male categories fought for the right to be crowned as champions, while their fans and schoolmates excitedly cheered on. It was Gwen Lizarraga High vs Wesley College in both females and males, and game 1 of both best-of-two Finals series had been drawn on Monday, 0-0 for the girls and 1-1 for the boys.

In the first game today, the female teams of Gwen Lizarraga High School and Wesley College played to another scoreless stalemate during regulation time, which caused the game to go into overtime.

During overtime, neither team managed to shake the net, therefore the game and series winner was left to be decided by penalty shootout.

It was high drama at the MCC after the first 12 penalty shots, 6 from each team, had either been kicked straight to the opposing goalkeeper or kicked wide of goal. When the seventh kicker for Gwen Liz, #6 Leolyn Martinez, the smallest player on her team, was just about to take her penalty shot, a gust of wind suddenly blew the football from off the penalty spot, and the referee had to intervene and once again set the ball in position. It was a sign, for Leolyn then kicked home the only goal of the game, after which Wesley’s kicker was stopped again by Gwen Liz goalie, Ann Ma Chang, and it was jubilation for the Gwen Liz girls who erupted into a wild victory celebration.

In the boys’ championship game which followed, the Wesley Boys struck first with a goal from #8 Nathan Oliver in the 21st minute.

The Gwen Liz Boys did not manage to rebound from the 1-0 deficit until the latter part of the second half when #10 Allan Castillo let off a shot from slightly past the midfield marker that slipped through the goalkeeper’s hands and rolled to the back of the net, tying the game at one apiece.
Regulation time for the boys’ game also ended deadlocked, 1-1, and it remained that way until 12 minutes into overtime when #6 Keeron Young of Wesley got a fast break and put the ball past Gwen Liz’s goalkeeper to capture the win for the Wesley Boys.

After the game, both teams were awarded with their respective medals and trophies.

The national competition, which will feature the winning teams from throughout the four quadrants of the country, will take place on Friday and Saturday, February 14-15, in Dangriga.